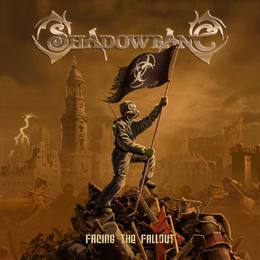 This is the second album from Shadowbane, a band that is based in Hamburg.  It’s release was postponed due to the burning down of the Hammer Studios, where Dirk Schlächter  was busy with the mastering process.

What this album brings us is a mix of typical teutonic metal, with some trash elements in it, but also something of a more US sound – think Iced Earth.  I’d say that this is music with its roots in the eighties, but with a modern work out, and a very crisp production. As the artwork suggests, the lyrics are not what you’d call happy, no they’re dystopic (dystopic is more or less the opposite of utopic), and are about a post-apocalyptic society. To me the vocals were a bit on the weak side, but since musically the band delievers a true feast of guitar riffs and also melodic harmonies.  All factors combined, this is a good album.