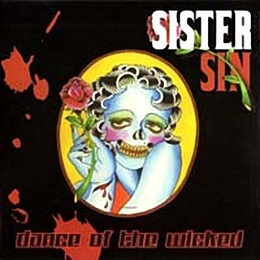 Sweden has always been the breeding ground of many great metal bands. One that has been taken from under the dust is the female fronted rock 'n roll band Sister Sin. Ten years ago, they released their debut record, called Dance Of The Wicked. But as the band didn't get the success they deserved back then, the American label Victory Records decided to re-release the album.
Dance Of The Wicked contains eight straight-in-your-face rock 'n roll songs, followed by three demo songs and a song simply called Rock 'n Roll, featuring the warrior queen and the queen of heavy music, Doro Pesch herself. Every song is very original, but as this is a re-release, I expected it to have been produced better. Because of this small malfunction, the band comes across as a very average band and even the vocals sound very average.

Dance Of The Wicked still is as good as it was a decade ago, but I doubt if the album will have the same effect Sister Sin had hoped for.