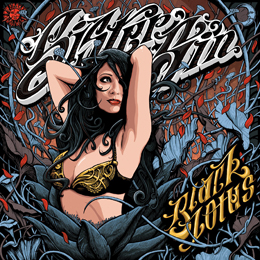 Since Arch Enemy and Walls Of Jericho it’s been proved that female fronted bands are also really big and heavy when it comes to metal. Well, Sister Sin is also one, great band who the vocals are lead by a female. This band comes with their Dirty Metal sound from the capital of Sweden. One of the biggest European countries which has great metal bands. Sister Sin is a powermetal band from which Sweden counts a lot.

They’re upcoming with a brand new album called ‘Black Lotus’ (2014). This is again a very strong album where they keep holding they’re same sound as their foreign albums. Their fans had been waiting for like two years for the band to release a new album since ‘Now and forever’ (2012). The band nearly exists for ten years. They forms in 2002 and since then they were fighting like an animal for their spot in the daily metal scene. If you see what’s becoming of the band, the band members can trustily say of their one that they have become a great name into the world of Heavy Metal.

So for those who like a good portion of Powermetal mixed with an wonderful female voice. I would say, go to your local record store and buy this goddamn album. It’s surely worth the money. Their style you can compare with bands like Grave Digger, Hammerfall,….

Oh, and a last quote from the vocalist they said in an interview with Metal Injection Magazine:

"We want to make you all bang your head, spit your beer and leave the gig with a big smile and a good wry neck!" - Liv.