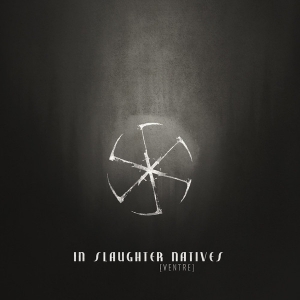 Ventre, dear reader, is actually a total artistic package, i.e. a book and a CD in one. But it’s not the first time that Cyclic Law come up with such thing. Cyclic Press can be considered as a visual art book-oriented sub-label of Cyclic Law, with material done before by Krist Mort and Dehn Sora. The first Krist Mort book on Cyclic Press, Inlumaeh, was accompanied by an album created by Lamia Vox (I did write a review for that truly excellent CD; see update November 16th 2014 or enter this project’s name in the ‘search’-tab), and Dehn Sora’s one got accompanied by an EP created in a partnership of his own outfit Treha Sektori and Swiss project Muhd. Unfortunately I did not receive the latter, which makes me sad, depressed, misanthropic and incomplete…

This time the visual / readable part concerns a collection of works done by French writer and graphic designer Nihil, which he did work on for more than a decade. It’s a 115-page collection of some philosophical and cryptic stories, a whole load on portraits of saints and martyrs, and a retrospective of previously unreleased or rare stuff – sometimes quite disturbing, yet permanently intriguing and, even in the most ugly cases, so beautiful. “A singular fictional universe growing and mutating within since his childhood, where unconscious fears and forgotten memories emerge as grotesque figures populating surreal landscapes and where everything appears as symbols and disguised archetypes. An ever-changing and bizarre tale marked by mystical heights and regressive downfalls.”

But I did not get the book this time either, so you’ll have to do with my thoughts on the accompanying CD, being one created this time by Swedish one-man army In Slaughter Natives. I do follow this act for almost thirty years, back then satisfying my human consciousness with some truly great releases on Staalplaat and Cold Meat Industry. For the Ventre collaboration, the aural part ‘contributes to create a complete sensitive experience along with the texts and images, in a natural symbiosis of atmospheres and inspirations.’ It’s a forty minutes experience that indeed comes with a magical and mysterious, somewhat ominous and obscure timbre.

The sonic part of the mutual symbiosis starts with One Last Farewell, which surprises me a lot. It does differ from what we’re used to, or at least from what I did expect to hear. Especially the first times when I listened to the album, I kept on verifying whether I did listen indeed to a new In Slaughter Natives recording. Yet somehow, then again there are resemblances for sure. Anyway, the surprise was a positive one, and still it is, each time I listen to Ventre again. But let’s continue with One Last Farewell. It’s like heavily droning factory-alike machinery, a brutal soundtrack for post-apocalyptic desolation. It might be the most In Slaughter Natives alike composition, I guess, with that subtle martial attitude and those harsh electronic drones, but at the same time it opens new dimensions which I had not seen coming. For sure the veil of mysticism and grimness that characterises this opening piece, does give me quite an uncomfortable feeling. Especially towards the end, when everything gets even noisier and nastier, these feeling get strengthened. instead of heavily pounding. The second track, 113th Scar, continues that ominous and misty path. It starts with deep-dark layers of synth majesty in combination with different percussion instruments (wind bells, shamanistic drums, Tibetan bells), and this combination creates a very creepy, somewhat lovecraftian atmosphere (me happy). I certainly appreciate the different synth-layers (courtesy of Mister Havukainen, evidently), for it overpowers and suffocates – and that’s the way I like to experience Ritual Ambient anyway! After almost two minutes, everything turns even more obscure and oppressing with a minimal yet oh so scarifying touch – subtle sounds defining the ingenious craftsmanship of a true artist… Ananda then again, goes even deeper into the mind, twisting with every reasonable thought you might think you have. This song is so mesmerizing with those tribal drum patterns, those bewitching keyboards (sometimes even violin / cello-like in sound) and, especially, those shamanistic (female) voices. Fragment 004 too comes with tribal percussion and a certain shamanistic approach, but it’s kindly injected by vocal samples, in French (and unfortunately I do not know where they do come from, these speeches). But it surely reminds me of Puissance in one way or another, if only for that reason (music-wise, it’s less martial or bombastic than Puissance, and somewhat more dissonant and distorted). Towards the end, however, the martial glory / victory / war hymn thing penetrates the minimalism of the first half, once again proving that ‘song writing’ and ‘craftsmanship’ are closely related right here. One Last Farewell is a more bombastic piece, including truly oppressive violin-alike melodies and an atmosphere that reminds me a lot of Sophia’s latest album (Unclean, Cyclic Law, published on April 18th 2016). Next comes Tumoral Dreams, quite rich in structural elements and, at the same time, minimal in execution. Here too a vocal sample has been injected, and so are the typifying drum patterns. Towards the end, horrific organ-like synths strengthen the abyssal obscurity of the song. Ventre eventually ends with As They Walk Hidden Within, which truly is a soundtrack for some obscure ritual. It’s like a cinematic event, including slow melodies, depressing piano play, asphyxiating synth lines (once again the reference to cello, violin or viola might come up) and calm drum ruffles.

So, overall, Ventre is another In Slaughter Natives masterpiece. It does differ from earlier material (no Industrial experiments at all) – but hey, actually all recordings were quite different, yet clearly courtesy of Jouni Havukainen – so do not hesitate to go after this album (or total package). In any case, I cannot but recommend this stuff if you’re into any form of Dark Ritual Ambient

The package is limited to 300 copies.