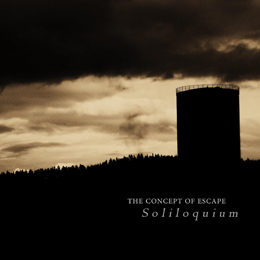 Before introducing this band and their first EP, some words about Symbol Of Domination Productions. This is a Belarussian label initially run by a colleague of Satanath’s label manager Aleksey. The latter did some PR-work for the label. However, earlier this year, his partner decided to stop his activities for this label, so it gets now sort of run by Aleksey. The label released some demonstrational material in the recent past. I will review some of them, like Black Antlers or Phrenetix (watch out for the upcoming reviews in the next days). In the future Symbol Of Domination Productions will focus on stuff that is slightly ‘different’ from Satanath’s roster, yet still with a common background. But first things first, and that’s the Soliloquium-EP The Concept Of Escape.

Young Swedish act Soliloquium was formed in 2011, and after the demo When Silence Grows Venomous, they wrote three new tracks that would eventually make it to their first EP, The Concept Of Escape. In mean time Jonas Bergkvist (bass) and Stefan Nordström (guitars and vocals) (both of them, by the way, are also involved with Desolator and Ending Quest) recorded a second EP (with two cover tracks), digitally and independently released.

The Concept Of Escape was recorded by the duo with session assistance on drums by Mortuz, who seems to have become a permanent member in mean time (intelligent decision, by the way, because I am truly surprised by this guy’s capacities). Mix and mastering, by the way, were once again elaborated by Gustav Gunnarsson, Jonas’ and Stefan’s colleague in Ending Quest. The EP consists of three pretty lengthy tracks (in between seven and ten minutes, with a total running time of about twenty five minutes), called Crossroads, Remnants Of Dying Dreams and Nighttime Revelation. Those tracks bring a form of integer, atmospheric, dreamy and desolate Doom-Death with some funereal aspects. Stefan’s grunts are very deep and growling, but there are quite some softer clean vocals too, as well as some throaty blackish screams. The instrumental side is pretty divers, despite lacking originality. What strikes me are the almost hypnotic tremolo leads, breathing a very depressed stench, and referring intensively to the current DSBM-trend. The rhythm section is of a pounding kind, with both drum patterns and bass lines doing a nicely supportive thing. Evidently there are lots of acoustic intermezzos too, but they are performed with care and attention. The production is pretty clean (just not over-polished), with a very satisfying mix (cf. the fact that each instrument is audible).

I saw someone comparing this material with the likes of (early) October Tide and Katatonia, and I do not disagree at all. Fans of NovemberS Doom, On Thorns I Lay and even older Opeth will surely adore this material too.