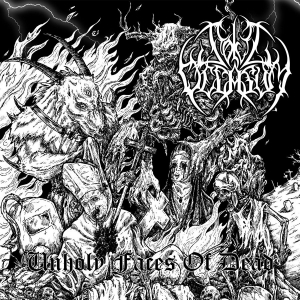 Solis Occasum are a young outfit by Alexey ‘Barghest’ Denisov, whom you might know as well from Incipit Satan. With the Solis Occasum solo-project, Barghest recorded and released one album before, being Orthodox Plague, which was released in 2013 via the very small Ost Legia Productions label. In 2014 he recorded and mixed a second album, Unholy Faces Of Dead, which gets released via Symbol Of Domination Productions and Hass Weg Productions. Hail!

The album brings forty minutes of traditional Raw Black Metal, the minimal and nihilistic way, combining melody with blasphemy, and structural nonsense with even more blasphemy. Undersigned needs to admit that he is sort of addicted to this kind of sonic un-pleasure, but being an honest, integer and totally objective reviewer (bfdlnsuh<b mnbùjqq – sorry, a moment of puking defining my self-knowledge, aha), I will not grant this stuff like superior just like that.

Therefore, we need a couple of outstanding criteria: the sound, the song writing, the performance, the overall atmosphere, the place within the current scene, and everything that surrounds the package (lay-out and artwork, lyrics, and so on). Let’s start with the last elements. Cover painting: cool! Inlay-painting: based on the cover, so once again cool. Barghest’s picture: so sweet… Yes, I am turning cynical, but there are two possibilities to translate this: the sarcastic, insulting way, or a vision on the essence of the scene; and guess what: which one will I be aiming for???

What about all other concepts? Well, the song writing, performance and atmosphere do indeed totally lack of an own identity. More than once it’s even predictable, as if I did hear this album, or at least some parts of it, before. But seen the great qualitative result, I do not think it might be a problem, at least in case this kind of Aural Art can satisfy your inner self. And then, the production, well this one is like it needs to be: extremely raw and unpolished, rough-edged and anti-clinical, yet not of the inferior kind – once again a winning game for Solis Occasum! So, isn’t there anything negative to add (in case you might truly search for it)? Well, if you do not mind about the lack of an own face, the anti-production, the recognizable riffing / structures, or the typifying sound, I do not think any purist needs to complain. So shut your mouth and listen, and float away to dimensions of Throne of Katarsis, Satanic Warmaster, Diaboli, Krypt, Vardan or Pest.