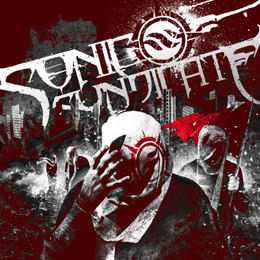 Sonic Syndicate is a modern metal band from Falkenberg, Sweden. They are influenced by Swedish melodic death metal bands such as In Flames and Soilwork and American metalcore bands like Killswitch Engage and All That Remains. The band was founded in 2002. Current members are; Nathan James Biggs | vocals - Robin Sjunnesson | guitar - Karin Axelsson | bass - John Bengtsson | drums

Fifth album “Sonic Syndicate” titled with their own name.. I think they want to start over with this album a kind of reset. Starting this cd was waiting a little bit before the song started. But when the guitar en drums started to scream I knew this will be a good album. You can feel the power with the voice of Nathan James Biggs. Second song “Black Hole Halo” starts very futuristic  with synth sound. A little bit a pop-metal song, not bad at all. 2 song are my favorites starting with “Long Road Home” what a beat and guitar riff, this makes my head banging without a problem. Second song “Catching Fire” maby not so heavy but nerveless breakable and fragile. This album is worth to buy many different styles with some experimental piece. That’s what I like!