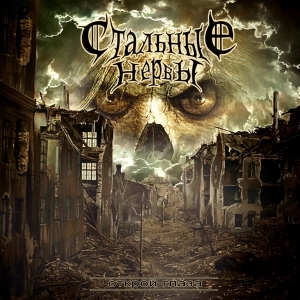 A couple of years ago, I can in touch with Alexey Korolyov, a very sympathetic guy from Saint-Petersburg who ran (and still runs) the label Satanath Records, and the guy behind the very interesting projects Satanath and Abigorum. In mean time he also founded Symbol Of Domination Productions, another excellent label from Russia. Both labels characterise diversity, yet with a certain darkened, f*cked-up attitude. All kinds of extreme Metal are like welcome on both labels. Many of the releases on those labels were distributed, or co-distributed, by Belarus-based GrimmDistribution.

A while ago, Alexey informed me that he took over GrimmDistribution. Initially I thought that specific organisation would keep on focusing on the distribution of stuff from Satanath Records and Symbol Of Domination Productions, and others, yet apparently GrimmDistribution was sort of redirected to a label on its own too. So, as from about one year ago, Alexey does run three different, yet closely related, labels. Congratulations!

First release on the newly reformed GrimmDistribution roster is the second recording of Стальные нервы ('stalnye nervy'), a four-piece hailing from the city of Brjansk, not that far away from the Belarussian and Ukrainian borders. The moniker means ‘nerves of steel’, by the way. This sophomore album is called Открой глаза ('otkroy glaza'), Russian for ‘open your eyes’, and it lasts for more than one hour. It gets released in an edition of 500 copies with a simple four-page booklet, without songs texts or whatever. Yet since my Russian language is limited to an insulting vocabular, I do not think it’s a problem. Native-Russian speaking people, on the other hand – but that’s a discussion not to go deeper into right here.

The band performs a powered form of traditional Heavy Metal with attention for all ingredients from the earlier years. The whole is quite guitar-based for sure, with a foundation based on energetic guitar riffs, with dueling guitar leads and a melodic bass sound. All this gets supported by quite varying drum patterns, which give the whole a fierce pepper-in-the-ass attitude. The whole thing gets permanently injected by melodic guitar leads and sharp, fast-paced solos, quite overpowering and hammering. Even though the band does not pretend to be an Epic Doom outfit, some of the heavier parts surely balance over to that way – which isn’t but a great thing to notice, of course. Other moments there are dual leads that tend to the NWOBHM-scene of Old, then again a thrashier Eighties-inspired spirit penetrated the whole. But in all cases, the coherence remains.

Vocally, there’s that well-thought use of two types. At the one hand, and that goes for the better part of the vocal appearance, you got those clean vocals by Roman (the guitarist of My Widow). Even though ‘clean’ isn’t exactly the correct description, for Roman’s voice has something unpolished, little rough. No high-pitched screams, just melodious voices is what you get. Besides, to my opinion Roman succeeds to put some emotion in his performance. At the other hand, you got some melodious harmony choirs and chants too – also not that much a stranger to this specific type of old styled heavy Metal – and it sort of brings hints of Power Metal to mind.

To end this. Стальные нервы conclude their album with a cover by АПОКАЛИПСИС. I do not why, but the own songs are quite more impressing than this cover version. But I do understand the link in between them for sure – make no mistake about that. It’s just that there are better tracks to cover, to my opinion. But overall, this whole album might be an arousing experience for Heavy Metal fans that crave for the earlier years of, especially, the West-European scene.