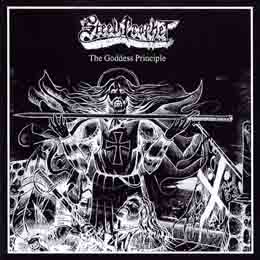 To celebrate the anniversary of the ‘The Goddess Principle’ album that came out in 1995, Pure Steel Records will do a rerelease of the album.

Steel Prophet is an American power metal band that started in 1983 and still goes strong. A few months ago the band released a statement the they’re very busy on writing new songs but in the meantime their recordlabel comes with this release.

There are many albums within power metal which, contrary to popular opinion, can be considered “cult” albums. “The Goddess Principle” was a particularly original fish out of water, in that it was an unadulterated fit of mid to late 80s United States Power metal worship, hitting every salient musical point between Queensryche’s 1983 EP to Helstar’s “Remnants Of War”. My current understanding of history is that this album was actually a 10 song demo that was put together on an 8-track tape recorder, and was later picked up by a German label in 1995, just in time for the death of grunge no less.  . The sound values are maybe a little bit humbler than those of the Crimson Glory debut, and the riffs are a tiny bit more thrashing and informed by Fates Warning’s mid 80s works, but this achieves about the same effect as the famed first studio assault of Midnight and company.

In the case of vocalist Rick Mythiasin, who literally sounds like he could trade blows with Geoff Tate at the peak of his skills on “The Warning”. Perhaps my only lone complaint about this album, and it is a fairly minor one, is that they essentially throw the best song at the listener right at the beginning. “Reign Of Christ” essentially marries the darkest and closest flirtations to thrash metal. But “Souls Without Horror” and “Devoid Of Logic” essentially gallop, pound, and speed their way into the realms of horror with intrigue. Throughout the rest of the album things are largely consistent, barring perhaps the odd little instrumental interlude “Ruby Dreams”, which features some odd vocal harmonizing and a piano solo quoting some old classical theme.

This was one of those albums that are so strong, it is almost sad that it didn’t receive a more posh production in the beginning. But new with the modern technics the album sounds very well.