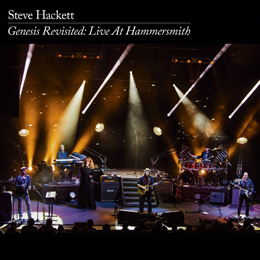 Just turned 64 years of age this February 12th of 2014, guitarist Steve Hackett is anything but an unwritten page in music history.

He started his career in the '60 with the bands Canterbury Glass and Sarabande, did his first recording with the band Quiet Life in 1970, and gained worldwide recognition by joining British Prog Rock act Genesis that same year...a band which he would leave in 1977 to pursue a solo career, having contributed to 6 studio (of which 7 singles were culled) and 3 live albums. By that time however, his work would already have influenced such great artists as Queen's Brian May, Eddie Van Halen (whom gladly admits having taken his finger tapping technique from Hackett), Rush's Alex Lifeson, and later also Marillion's Steve Rothery. The early '70s line-up reunited a couple of times for a variety of reasons, but the one-off show done on October 2, 1982 to raise money for Peter Gabriel's WOMAD festival, was the only performance that line-up of the band ever did since the split in 1977. In the course of the last couple of years, rumours about a possible getting together arose again, but those were first set on hold when in 2007 Peter Gabriel expressed reservations, and then crushed for good when drummer Phil Collins announced his retirement in 2011.

In 1986, Hackett got off his solo project for a while to co-found supergroup GTR with guitarist Steve Howe of Yes and Asia fame. GTR issued a self-titled album which did very well indeed (selling Gold), but when Hackett left to resume his solo projects, the band split. Also in 1986, Hackett participated on Box Of Frog's second album (a project a former Yardbirds musicians), and in 1989 he was the originator of the charity project Rock Against Repatriation, to which a host of well-known Prog and Pop musicians contributed. Since then, Hackett has released albums on a regular basis, in the course also venturing into integrating Classical and Jazz into his music, as well as alternating between acoustic albums and more Rock-geared ones.

In 1996, Hackett brought a first album in the series of reminiscing his work with Genesis, through the release of the album Watcher Of The Skies: Genesis Revisited, an 11-track album with a host of guests, including vocalists John Wetton (on 2 tracks; and additional bass on one of 'em), Paul Carrack (on 2 tracks) and Colin Blunstone (one track), Hackett apparently taking care of most of the vocals himself. A second album was released in October 2012, with the double-CD Genesis Revisited II featuring a total of 21 tracks, of which 4 never made it to Genesis albums, but either written or rehearsed by/for 'em (and later recorded for his solo albums). Hackett's original idea was to make his pick from what he considered to be the best songs from his time Genesis, that were not featured on the first album, but then fans suggested that he chose those songs which have an emphasis on the guitar. Eventually Hackett hose the middle way, pleasing both his fans and himself! Vocal guest this time around were a bit more extensive, and included Steve Wilson, Mikael Akerfeldt, Simon Collins (Phil's son), Conrad Keely, Francis Dunnery, Neal Morse, Nad Sylvan, Nik Kershaw, and John Wetton (the latter the only returnee from the 1996 sessions). The album also hosted guest guitarists Steve Rothery (Marillion) and Roine Stolt (The Flower Kings/ Transatlantic). In fact, the album featured no less than 35 guests (“only” 23 on the first Revisited album), and garnered a very positive response from both media and fans alike. Obviously, a tour had to follow, and this was also met with equally stunning reception...

...and from a recording at London's sold-out Hammersmith on on May 10th, 2013, is where the 3-CD live document we now have under or attention culls from! On that night Hackett's usual band (which is comprised of singer/ tambourine player Nat Sylvan, saxophone/ woodwind/ additional keyboard player and additional percussionist/ backing singer Rob Townsend, keyboardist Roger King, bassist/ backing singer Lee Pomeroy, and drummer/ backing singer Gary O'Toole) were joined by a host of guests including guitarist Steve Rothery and singers Jacko Jaszyk, Amanda Lehmann, Nik Kershaw, and John Wetton, who all came on stage for their individual little spot in the limelight! As for the set-list on this evening...let's just say that 1971's Nursery Crime and 1976's A Trick Of The Tail are the least represented (only one song each). In all, the evening's show took no less than 2 hours, 41 minutes, and 20 seconds, and that's why the songs are divided over 3 CD's, with the last one containing less than 20 minutes worth of music! Music which is quite timeless but which...and it's important to state this...has made this here reviewer look back on his past with a touch of pleasant nostalgia.

The evening was also filmed, footage which was released at the same time as the triple CD package on a double (slipcase) DVD. I guess the second disc there holds bonus material, but for some reason the record label neglected to let us in on what that might be! Anyway, great release, this!