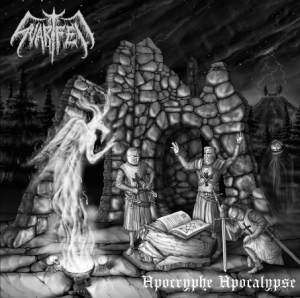 One of the outfits of Valhgarm (he also acts under the names Wargrinder or Arkarior in bands, formerly or currently, like Vermeth, Monarchia Daemonium or Hellraper, especially as drummer) is Svartfell, which he started in the beginning of this century. As Svartfell, Valhgarm released two albums before, The Sentence Of Satan and Day Of The Unholy Massacre, and on June 15th 2012 he returned with a third full length (I know, once again an ‘older’ piece, yet truly worth earning some additional promotion and support! Hail to both the project as well as the label!).

Apocryphe Apocalypse got recorded in 2011 at the Howl-Wolf Studio, and this collection of death curses consists of nine pieces, having a total running time of forty six minutes. And first a word of appreciation about the artwork, which is based on the darker sides of the Templar Knights, and which fits well to the lyrical aspects of Svartfell’s poetry… Very nice indeed! It got released in an edition of 1,000 copies thanks to the devotion of French Hass Weg Productions, as mentioned before, and the sonic side, well, please continue…

As from the very beginning, it’s pretty clear that this project makes no deals, no compromises. Apocryphe Apocalypse breathes necropsy, misanthropy and apocalypse. But actually, the elementary aspects that characterise this project, are the great, excuse me, the excellent use of epic passages amidst the warlike outbursts. It is not ‘once in a while’ that his happens; no, this specification is a channelling that defines every piece on this album. For example, this element gets defined by the not that unexpected yet, actually, inherent and prominent changes in tempo (one single example, amongst many others: Asmodée …, with its fabulous equilibrium in between blasting and post-war excerpts) and structure. And I dare to go even further. Despite not coming with something renewing (bla! – il y a quelqu’un qui a des problems avec cela???), Svartfell have so much more to offer with their sound, their attitude, their performance.

Some pieces rather focus on the theatrical heaviness of epic supremacy, while other breathe the essence of the Thrash-edged basics of the scene, and others do uncompromisingly use a symbiosis of both aspects. But in any case, the power of ‘victory’, ‘war-lust’ and ‘epic’ remains a key-aspect within this project’s story. Both the Scandinavian as well as the East-European scene do come to mind – let’s be sure about that. And within the acoustic intermezzos (and in this band’s case they are truly admirable; listen for example to the one in Depth Of The Sacred Stone, and you will understand my enthusiasm) there is even more that defines the professionalism and excellence of this French one-man army. Once in a while the band even delves into spheres more catchy that before (cf. INRI …), but even in this case / these cases one cannot mock any pathetic identity.

The sound quality is quite raw and rusty, but it’s less ‘inferior’ to many comparable releases. Actually, despite the primitive and minimal production, I think the result is quite remarkable, for having 1) an appropriate balance in between all instrumental aspects (or: the mix focuses on all ‘ingredients’ and who am I to disagree???), and 2) coming with quite an overwhelming and overpowering strength.