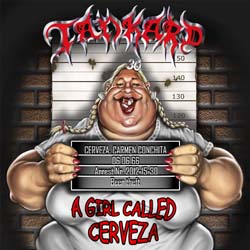 The story of Tankard is an exceptional one. It was around 1982 when they came into life, but it wasn't until 1986 when their first album was recorded. The band was somewhat of a pioneer, they were spearheading a wave of German thrash bands who became successful worldwide (Kreator, Destruction, Sodom, …).

And while a lot of other bands struggled, split up or came back with reunions, Tankard never had these problems. They have always been there, and they kept their worldwide fan base for all these years, delivering one strong album after another. When you think of beer and Thrash Metal the name Tankard is the first that will pop up for sure or so they like to say themselves. And with their latest record, their success is a no brainer. Good music, fun lyrics and hearing these guys have fun. Im actually not a fan of these guys, but this is one of those few records that doesn't seem to bother me upon hearing it. Its like i said, this is fun music and so fun to listen to, even if the lyrics are a bit silly.