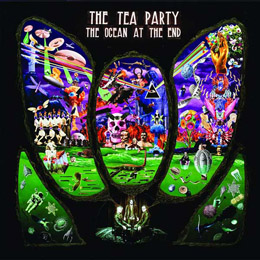 Well, well...mysteries àre of this world, 'cause here's yet another relatively well-known Canadian Progressive Rock act (selling 1.6 million albums worldwide and achieving a #1 hit on the Canadian singles charts with “Heaven Coming Down” in 1999) on with no less than now 12 albums (among which a compilation and a live album, but also 8 releases through EMI Music Canada) to their name...and I'd never come across any of the trio's music! Until now, that is...but looking at the band's history, the latter two albums just might never have happened!

The band was formed in 1990 by lead singer/ guitarist Jeff Martin, bassist/ keyboardist Stuart Chatwood and drummer Jeff Burrows. Having each played together in bands during their teenager years in Windsor (Ontario, where the band originally came from), they sat in for a massive jam session at Toronto's Cherry Beach Rehearsal Studios, and drawing on influences from Psychedellic Rock and Blues, came out with their self-titled debut album which they released on their own label, Eternal Discs, in 1991. They were picked up by EMI Music Canada in 1993 (following the release of their 1992 Capitol Records Demo), through which they would continue to release the recordings (mostly produced by Martin) Splendor Soils (1993), The Edges Of Twilight (1995), Alhambra (a 1996 EP), Transmission (1997), Tryptich (1999), Tangents: The Tea Party Collection (the 2000 singles compilation), The Interzone Mantras (2001), and Seven Circles (2004).

Very soon in their career (notably from their 1995 release on), the band developed their specific sound, drawing additional influences from Prog Rock, as well as from Indian and Middle Eastern music, which the media swiftly dubbed as “Moroccan Roll”. For Alhambra, the band opted for an acoustic approach of some of their songs on The Edges Of Twilight, and the band followed up the release with an acoustic tour of Canada. Transmissions then, was a relatively aggressive album (a reaction by the band on several negative things in their career, including management and label support), and found the band flirting with electronics a first time. Both latter albums were a return for the band to their “Moroccan Roll” style, but with a fine-tuned experience in the matter. Due to creative differences, the band officially disbanded in October 2005, with Martin suddenly announcing the beginning of a solo career (while the other members were convinced the band was simply taking an extended break). In the first 15 years of their career, the band toured Canada on 21 occasions, and Australia on 12. In Nov. 2012, the band toured their homeland with symphony orchestras to bring re-interpretations of their songs. In addition of the albums, they also released a DVD compilation of their videos, titled Illuminations, in 2001. The band was nominated 22 times for the MuchMusic Video Awards, and won 3 awards in the category “Favourite Music Video” at the People's Choice Awards.

After the break-up, Martin moved to Ireland, released his solo debut Exile And The Kingdom in 2006, went on to tour parts of Europe, Canada and Australia, and followed up his solo studio debut with the live albums Live In Brisbane (Nov. 2006) and Live In Dublin (May 2007). In mid 2008, he announced the formation of his new band, The Armada, which broke up in 2010 without releasing anything. Martin then founded Jeff Martin 777 with Jay Cortez (bass) and Malcolm Clark (drums), whose debut album The Ground Dies made it to #51 on the Canadian Album Charts. Chatwood, from his side, made a living by continuing to compose music for the Prince Of Persia video game soundtracks. And Burrows, he joined no less than Rush's Alex Lifeson and Geddy Lee, and other Canadian musicians, as drummer in the one-off project Big Dirty Band. He also presented the midday shift on Windsor based radio station The Rock. In 2008 he announced the formation of the band Crash Karma, which would record its debut album in early 2009.

In early 2011, several things had apparently led to the former bandmates getting together again, and on April 12 an official Facebook page was launched, announcing that the band would be playing shows again that same year. The following day, local radio station K106.3 announced that the band would be playing the Sarnia Bayfest, and this was confirmed the same day on his radio show by Burrows, whom added that a Canadian Summer tour was in the planning. On one of those shows, Martin implied that they would be together again on a permanent basis with the words, “We are the Tea Party and we're here to stay. And we're never going away again.” In December of the same year, during yet another show, the band announced that they would hopefully record a new album in the year to come, and Martin confirmed earlier reformation rumours by stating, “The Tea Party is back for good!”

Well, it took the band a little time to get the album ready, as first of all they would tour Australia extensively...but at the end of that tour the guys took time out at Byron Bay (Melbourne) for some jam sessions, from which the first ideas for a couple of new songs ( namely “Brazil”, “Cass Corridor”, “Submission”, and “The Water's On Fire”) were borne. But the true proof of the band members' re-found friendship would come, when they got together in Windsor to bash out the other 8 tracks on the album. To their amazement, things worked out perfectly, the hiatus having smoothed out the musical differences, jam sessions were actually fun again...to which came the added incentive of maturity as far as songwriting went. Meanwhile, to tie over the fans who were waiting for new material, the band decided to release the double-disc Live From Australia: The Reformation Tour 2012 (also released as DVD – the album, by the way, was funded over a 5-day crowd-funding period after the 2012 tour).

Well, the album's finally there, and the band's fans should not be disappointed, because the band picks up the thread where they left it in 2004, expanding on the “Moroccan Roll” style with some inclusions of electronics on a couple of tracks (check “Submission” for some of the more aggressive electro tones, but also the great hidden album-closing instrumental, “Into The Unknown”, for some more emotional vibrations). Of course, Martin's baritone voice rules the vocal part of the album, but that's something to be expected. For myself, his vocal stylings were somewhat weird at first, but I soon settled back in my easy-chair to hear his voice blend in perfectly with the really versatile music. According to the bio sheet that came along with our promo download of the album, The Ocean At The End contains some of the band's most streamlined music, and that shouldn't be a surprise, really...as additionally to Martin's engineering and producing of the recordings, the album was also mixed by Grammy Award- winning David Bottrill (whom you might known from working with the likes of Rush, Muse, Peter Gabriel, and Tool among others).

Okay now, so here's for the pleasant surprise : I found out that in the “Music” section at (www.) teaparty.com, you can listen to all 12 tracks on the album! Check it out...and enjoy! Oh...and at (www.) teaparty-online.com, you'll also find videos, including an acoustic set featuring the album's songs “The Black Sea”, “Water's On Fire”, and “The Maker” (the latter actually a cover). Additional trivia about the album : there's two guest performances, the first by one Aline Morales (playing additional percussion on the track “Brazil”), the second by Ian Anderson of Jethro Tull (for some moody flute in the album title track's opening sequence).