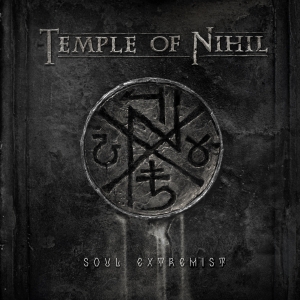 Soul Extremist is the very first release by a young duo (I do not know whether the members are young – just like I am – but the project was formed in 2015, and that’s what I meant with ‘young’ – except, once again, compared to my juvenile virility…). They’re called Temple Of Nihil, hailing from the Kaluga Oblast, somewhere in between Moscow at the one hand, and Ukraine and Belarus at the other.

Their first recording, Soul Extremist, gets released by Kazakhstani label Narcoleptica Productions and mighty Symbol Of Domination Productions, the latter being a side-division of the great Saint-Petersburg based Satanath Records (owned by Satanath / Abigorum frontman Alex K.). The 8-page booklet jewel-box is available within an edition of 500 copies worldwide, and it includes quite occult artwork by Vladimir ‘Smerdylak’ Chebakov, also known for his assistance on releases of, for example, Rossomahaar, Katalepsy, Melancholy, Semargl, Arkona or Psilocybe Larvae, amongst many others. This four-tracker lasts for twenty-five minutes, indeed with four tracks that last in between five and seven minutes each.

What this two-men army brings is a grandiose some kind of Post-oriented, and still ‘traditional’, Melodic Extreme Metal. Temple Of Nihil’s material is diverse in tempo, yet always focusing on one single aim. Let’s take that first track, called Devilution, for example. It’s a mainly slowed-down Post-Black creation, comparable to some of the later Mayhem songs (instrumental-wise, not when talking about vocals or the production), or stuff à la Vesania or Panchrysia. This piece has so much to offer, with a huge diversification in speed and structure at the one hand, and a fabulous equilibrium in between melody and fierceness at the other. The power of the rhythm section goes so fabulously hand in hand with the lead sections (hey, listen to those leads towards the end; aren’t they just excellent, especially in combination with those wonderful rhythms section parts?!). Temple Of Nihil succeeds to keep on that high level whole of the time, going for the slower passages, the mid-tempo ones, as well as the faster outbursts. Ov Spiders, for example, is such a track that defines the magnificent execution of this Russian project. Sometimes it’s like a volcanic eruption, pyroclastic-wise, devastating the listener’s eardrums; then again, the massive loudness of utterly doomy heaviness creates, in its own way, a comparable devastating cruelness. And still then, Temple Of Nihil maintain that grandiose melodic aspect, that superior and magnificent feeling of superior reliability. The tracks Iblis and Soul Extremist, for example, even go further – just imagine that fluently elaborated persecution of blasting passages, harmonious excerpts and melodic parts, all with permanently interacting solos, tempo-changes, rhythm shifts and so much more. Especially the first one out of the two songs mentioned perfects that balance. But the latter too, the title track, is like a symbiosis of all majestic and magisterial aspects that this band stands for.

Anyway, for some reason I do not want to go deeper into the subject right no, I decided, when I wanted to go on with this webzine, to quote all reviews with a score completed to a multiple of five. Actually, I wanted to score this release with – well, no, it does not matter; I don’t like scores, for it’s a momentary expression, but I feel like… It was something like 92/100, yet seen the completion… …for what it’s worth, of course… Let’s agree that this EP is just a grandiose, superb recording!