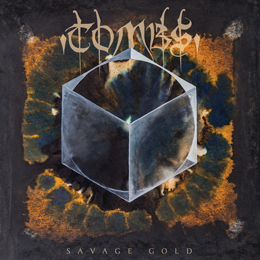 Finally New York-based Tombs (Mike Hill-g, v; Ben Brand-b; Andrew Hernandez-d; and Garett Bussanick-g) return with the successor of the splendid Path Of Totality, which was released in June 2011. In the Archive of this site you will find the review within one of the Relapse-specials I did; see update September 18th 2011. And for the interested ones, the review on the compilation Fear Is The Weapon was posted somewhat earlier, on February 13th 2011, also still available in the Archive-section.

Savage Gold is the third album, having a total running time of almost one hour. The material was recorded and produced by Erik Rutan, and it gets released once again by long-time befriended label Relapse Records. And as from the very first track, Thanatos, I am totally ‘into’ this quartet’s superior craftsmanship once again. Thanatos is an extremely heavy (of the massive, mauling kind), fast and violent piece of somewhat sludgy Black Metal with a Post-Metal vibe, several slower passages (which are at least as colossal in performance), and an atmosphere so dense, so oppressive, so intoxicative… Tombs develop an approach that is rather different from any other band or project acting around. Their approach is unique, taking elements from different kinds of Aural Art, and making a unique symbiosis of it. Tradition meets progression, translated in a timeless framework. Every single piece on Savage Gold is a gem, all of them with a very own identity, yet with a fabulous cohesion and a characteristic realization.

In comparison with the earliest years, Tombs are more ‘directive’, with less noisy and / or industrialized elements, and more technically-progressive details (not of the avant-garde kind!). And in comparison to the last effort(s), the material has gone more ‘Post Metal’ again (a track like Séance, for example, is a purest interpretation of gargantuan Post-Black majesty) and less Doom-laden (despite hands full of slower passages). Yet still the unique approach from the earlier years do characterise the material on Savage Gold. Maybe, just maybe, this stuff is less unusual (I do not want to say this record sounds ‘mainstream’, of course), and little less explorative, but still it is a grandiose journey through fabulous aural dimensions. Savage Gold will be an often-returning title within several end year’s lists!