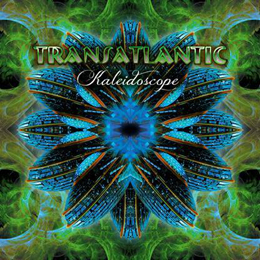 You know, I would've sworn I'd had to review a Transatlantic album before, but a short check proved me wrong in that respect. Of course, I hàve come across bands of the individual members. Guitarist/ singer Roine Stolt is known, for instance, of The Flower Kings; bassist Pete Trewasas from Marillion and Edison's Children; keyboardist/ singer Neal Morse (besides his past in Spock's Beard) is a celebrated solo artist; and drummer-extraordinaire/ singer Mike Portnoy used to bash the skins with Dream Theater (as well as in several projects). Most recently, the latter two also activated Flying Colours, which is where I encountered the duo on the occasion of the release of a live album. But let's return to Transatlantic's story...

(story below derived from the band's page on Wikipedia) ...which started back in 1999, when band founders Morse and Portnoy contacted Fates Warning guitarist Jim Matheos, but found him unavailable to participate in this new venture of theirs, for which the name was originally Second Nature. They next tapped Stolt, and to complete the band they also contacted Trewavas. With Portnoy as the band's coordinator, things were set up as professionally as in all things he does, including contacting cover artist Per Nordin, whom suggested the band use the name Transatlantic (a name which obviously stuck, possibly partially because of the nature of the band's line-up, with two members from America and two others from Europe, divided by the Atlantic Ocean). The band's debut album SMPT:e (the title of which is taken from a common machine time protocol used in high end recording studios...and which, as you may notice, includes the members' last initials) was released in 2000 (both as regular CD and in a limited version with bonus disc) to rave response from the media and fans alike, and a subsequent tour of the US led to the 2001 release of the double live CD Transatlantic Live In America (with the band paying tribute to some of its musical heritage by playing also covers of The Beatles and Genesis).

The foursome swiftly fund themselves in the studio again, and 2001's Bridge Across Forever found the guys going for the long-form of songs again (SMPT:e already sported a 31-minute track in “All Of The Above”), with only the title track coming in at a mere 5 minutes (“Duel With The Devil” and “Stranger In Your Soul” lasted 26 minutes, while the in-between track “Suite Charlotte Pike” came in at 14 minutes). The bonus disc of the limited edition version of the album also included a cover of Pink Floyd's Shine On You Crazy Diamond”. This time, band toured Europe, in November 2001, with Daniel Gildenlöw of Pain Of Salvation sitting in as fifth member on keyboards, guitars, percussion, and even doin' some singing, both background and lead.

In October 2002 however, Morse left his regular band Spock's Beard. Having found a new belief in Christ, he decided to leave the mainstream Prog scene, and launch a career as a Christian musician. Obviously, this also ended Transatlantic, as Portnoy would not hear of continuing the band without his friend. 2003 still saw the release of a double DVD entitled Live In Europe (also released as double CD), documenting the band's last tour. In the years that followed, Morse and Portnoy would collaborate regularly both in the studio and on stage, and Morse's shows usually included one or more Transatlantic songs. Then, at the 2008 Three Rivers Prog Fest in Pittsburg, Morse was reunited with both Portnoy and Stolt, in the performance of two tracks off Transatlantic's debut album. Eventually, it was announced on April 16, 2009, that Transatlantic had officially reunited, and were working on a new studio album.

That album, released in October 2009, consisted of the single 77-minute title-track “The Whirlwind”, and reached #21 on the Billboard Heatseekers charts in the US. Two limited editions of the album were also released, the first adding a bonus CD with 4 extra original tracks and 4 covers, the Deluxe version adding a DVD documenting the making of the album. In support of the album, the band (again re-enforced by Gildenlöw) toured North-America and Europe in April and May 2010. Recordings of some of the shows led to the live albums Whirld Tour 2010: Live In London (released later that same year) and More Is Never Enough: Live In Manchester & Tilburg (released in 2011).

Some extra trivia? Okey then! At the end of 2012, Morse compiled an album entitled A Proggy Christmas. It was performed by “The Prog World Orchestra”, which per track has different well-known names from the Prog Rock scene as its members. Of the 10 tracks, the line-up on the instrumental “Silent Night/ We All Need Some Light” are actually the 4 Transatlantic members. Want more? Well, in February 2013, the new Neal Morse band (with Mike Portnoy) and The Flower Kings started a European tour together. The encore set featured Morse, Portnoy and Stolt, with Jonas Reingold and Randy George alternating on the bass, playing Transatlantic songs, and ended with a total of 11 musicians on stage!

In May 2013, Portnoy announced that Transatlantic had finished writing the songs for a new album. Recordings done during the Summer found two epic-sized tracks (album opener “Into the Blue” and album closer “Kaleidoscope” have a length of 25 and 32 minutes respectively) and 3 “normal”-sized songs, and a total of 8 covers (for the limited edition) encoded for posterity. Of course, when it's quality Prog Rock you want, you can hardly go any better, but still, even though the song quality id top-shelve and the performances A-grade...I can't say the guys do anything I don't expect of 'em, considering where they come from! Prior to the album's release, a music video for “Shine” (one of the “shorter” songs) was released on December 2nd of last, and two weeks later the band's version of Yes' “And You And I” (off the bonus disc) was released on the label's SoundCloud page. On the same day as the album, a video for “Black As The Sky” (a second of the shorter songs) was released. Funny thing about Transatlantic: I can never make out whom is doin' the lead vocals! Oh, by the way, one Chris Carmichael plays whatever cello you can hear on the album, Rich Mouser playes the pedal steel guitar in the track “Beyond the Sun” (shortest song on the album, only 4 ½ minutes long!), and Daniel Gildenlöw is the special vocal guest on “Written In Your Heart” (a section of the 7-part title track of the album). The bonus disc (of the limited edition, remember?) not only includes the already mentioned Yes cover, but also covers of ELO's “Can't Get It Out Of My Head”, Procul Harum's “Conquistador”, Elton John's “Goodbye Yellow Brick Road”, Small Faces' “Tin Soldier”, Focus' “Sylvia”, King Crimson's “Indiscipline”, and The Moody Blues' “Nights In White Satin”. Now, I'm sure that you'll be able to find the videos at YouTube, and so, next to getting yourself the album (or goin' out to your local record store for a listening session), I guess that's the best way for you to taste some full-length songs off the album's. Feel free to search the Net for more at your own leisure!