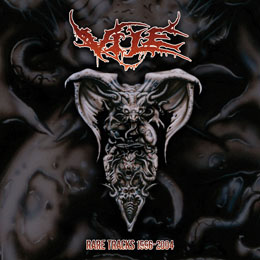 California-based band Vile was formed in 1996 and throughout the years, they offered us more than just a couple of decent recordings. Especially Listenable Records were so kind to please us with Vile’s sweet harmonies, and in 2011 Vile released the long-awaited comeback album Metamorphosis (via Willowtip), which was slightly different from the past.

Rare Tracks 1996-2004 is, as you might have guessed, a compilation with, indeed, rare tracks from the era 1996-2004. The compilation features material from the Vile demos (many of the tracks did appear on their full lengths) and live songs, amongst which an At The Gates cover. The whole has been re-mastered by the band’s guitarist Colin Davis at Imperial Mastering, by the way, and it will be released worldwide in a limited edition of 500 copies only.

The first eleven pieces on Rare Tracks 1996-2004 are taken from the demos Unearthed (1996; three titles), Vile-ation (1997; three titles), Relapse (1999; three titles) and New Age Of Chaos (2004; two titles; this demo was some sort of prequel to the so-called 2005 full length) and without exception they do come with a splendid sound quality. Both tracks from New Age … do differ a little from the older songs; especially the lyrical approach changed from gore themes into a more serious approach of death and war, but musically too the band evolved into a more technical Death combo. I still remember having heard and read mixed opinions about it, but I could appreciate this change a lot (note: with their 2011 album, the press-and-audience’s opinions were even more divided).

The live registrations (tracks 12-15) are taken from the period 1999-2004 on different locations (in San Francisco, the band’s natural habitat, especially), and the sound quality of these live incorporations is more than acceptable as well (and so, of course, is the performance for sure).