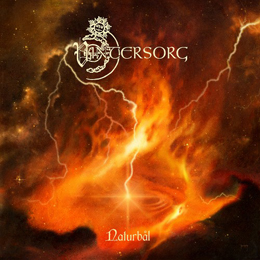 I’ll skip every unnecessary introduction about the huge discography, lengthy history or influential theory by Swedish act Vintersorg. I have no intention to go into Andreas Hedlund’s enormous curriculum vitae either. Just read what I think about this new Vintersorg-album, whether you like it or not.

Since this project by Andreas lives within Napalm Records’ roster, I do follow them. Unfortunately, I have never been such a fan (I prefer some other things Andreas did in the past, but that’s another story). Nevertheless 1) I can, and will not ignore the influence this project has on the current scene, and 2) I always appreciate at least some excerpts on each single release under the Vintersorg-moniker. No kidding, I honestly do.

Well, when I first listened to this newest album, Naturbål, I was enormously enthusiastic. Okay, let’s not exaggerate, but in comparison to the latest releases, I think this one is a huge progression (and now, beware, I’ll come with a complete contradictio in terminis) for going back to the roots (got it, ‘progression’ versus ‘roots’?...). And at the same time, this album goes further to where the former stuff has never been. Naturbål combines the elementary Folk / Viking grotesquery from their early 2000’s-era and the blackened aggression from the earliest years, with a naturally-evolutative core-essence (which can be compared to the evolution Borknagar undergo; don’t ignore this fact!).

In comparison to the latest recordings, this one is, once again, a great step forward, I think. All right, it isn’t but my personal opinion (this is my review, so I can write whatever I want), but I think the fact that Vintersorg traded some of its later catchiness (and then I am especially talking about the overdone proggy faeces of a male bovine, aka bull’s shit) in favour of the strength from the earlier years is something I do appreciate. And damn yeah, I need to admit, even this is not necessarily my chalice of blood (alternative for the boring cup of tea; though, who can resist some psilocybe tea infusion?...), that the song writing is truly ingenious, despite its catchiness. Mister Hedlund is a pure musician with great ideas (even though they do not always stroke with other people’s ideas), and his performing results are very professional, convincing, impressive.