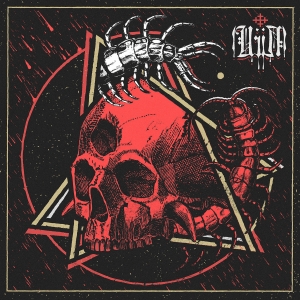 VOID, or better: VƆID, are an act from the city of Nantes (in the West of France, not that far away from the Atlantic shores). They started jamming, yeah, at the very beginning of this decade, and in 2012 they released a demo (Hate & Roll, limited as compact disc) and a split with side-project Blacktyde. Then… silence…

…until now. The band, with newly recruited members, recorded some new material at Brown Bear, which got eventually mastered at MasterLab Systems. The stuff was initially released totally independently the digital way and on compact disc, yet totally the DIY-way, at the end of Spring 2018. But hey, this is where Les Acteurs De L’Ombre Productions entered the story. This (fabulous) French label decided to have this stuff released decently on CD (in three-panel digisleeve package), and who are we to blame them? Indeed, honour, gratitude, praise! Actually, it is not that strange, for ‘singer’ CML² worked with the label before as graphic / visual designer (Heir, Pensées Nocturnes, Arkhon Infaustus, and flyer material for LADLO live gigs), yet the human being behind the label comes from the very same area as well, which shows an attitude of ‘local support’. So, here we have it: a decent edition of Jettatura by French maniacs VƆID.

The album, labelled as ‘Black ‘n’ Roll’ material, consists of six tracks that last in between almost five and seven minutes (with a total running time of about thirty-five minutes). Jettatura is very melodic and groovy, and indeed has that Rock ‘n’ Roll attitude. The stuff is not meant to be harsh, fast and devastating, yet to pull and push, to pound, to thrash out. And despite a certain catchiness, the result actually does not sound childish at all. On the contrary; these tracks do surely exceed the narrow-minded limitations of would-be riffing, for this band has a lot to offer. The catching melodies have that epic execution, which is not that uncommon within the Scandinavian (Norwegian especially) scene. The play comes with an energetic groove and, at the same time, a bewitching approach. The tremolo leads and deep-grunting blackened vocals are like a bulldozer, a tank rumbling on and on, and the fine thing is that all this gets nicely assisted by a splendid rhythm section. The bass lines, the drum patterns (just one example: the first minute of We Come We Breed We Live; you’ll immediately understand what I am talking about) and the rhythm guitars, all of them act like (Greek god) Atlas, carrying the whole world (in this case: the lead sonic part) on his shoulders. It is not of some high-tech core, yet rather elementary, but I think that’s the strength of this album! And of importance, at the same time, is the quality of the production. Indeed, the recording quality is just top-notch. At the one hand, you have a certain roughness, a raw, unpolished sound that, once again, reminds me of the Norwegian scene (remember the legendary Grieghallen? That’s what I mean indeed). And at the same time, the production lacks annoying elements – no noise, no ‘sonic mist’, and even better: a grandiose balance within the mix.

Imagine a bastard child of Sarke / Tulus (and Khold, in extension), Satyricon, Taake, Darkthrone (why not?), Vesen, Carpathian Forest and Aura Noir (did I mention Norway?) (okay, I’ll add some other ones: Cavus, Pest [the Swedish one], Curse [the one from Iceland, evidently], Watain, Horned Almighty and Hellhate, to cross the borders of Norway) and you’ll come close to the sound and approach of VƆID’s Jettatura.