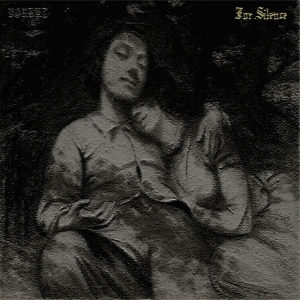 Vorbkt are a one-man outfit from the windy South-East of Canada, where the Atlantic crushes and smashes upon the shores of civilization. The guy behind the project (-z?) started this project in 2011 and since then he recorded and released two hands full of stuff, especially independently released. After some demonstrational and mini recordings (singles and EPs), a first full length got released at the very beginning of 2015 (Sixteen Travels To Our Destruction), and now, exactly one year later (and with the release of a split with defunct act Cult Of Mourning in mean time), Vorbkt return with For Silence, which lasts for forty four minutes.

The opener A Reason To Celebrate (is it time to party?) starts quite windy indeed, with a semi-acoustic introduction, soon evolving into a quite primal and minimal, somewhat slow-paced blackened trend that combines Nordic epic with that primitive no-nonsense attitude of the early days. The song slowly turns over to an acoustic last part, which shows an ingenious view on the global vision of the Underground scene. Like Velvet too continues within that vein, adding old styled nihilism to the doom-laden rhythms and 666-oriented structures, and including acoustic and semi-acoustic excerpts. Hail the Horned One, or something like that… Quite often the most lo-fi origins of Darkthrone, Enthroned, Craft, Satyricon, Enslaved (all of them: the early years!), as well as the likes of Anthropophobe etc., get touched with orgiastic pleasure. Indeed, it means a lack of originality, but once again: f*ck originality when the soul, the spirit, the essence defines the essence, the truth of the scene.

With short pieces like For Silence, Vorbkt touches rather emotive angles, dreamlike and, at the same time, hypnotic, like a tranquillizing counterbalance to the grimness of the blackened parts. But then again, the last track, Coma (Silence Will Light My Freedom), which lasts for more than twenty minutes, is like a symbiosis of the whole experience, and for sure the highlight of this (interesting) album. There’s so much going on, with quite a diversity in tempo, atmosphere and structure, yet without losing grip on cohesion.

Sound-wise, the whole experience stinks. There is too much ‘noise’ on the background, and the mix simply sucks. That’s a pity, for the result suffers from this shortcoming. But I am not that much depressed – I mean that I’ve heard worse; and besides, the ideas, the basic intentions keel over to positivism (haha, what a refuting definition…). Yet still, I am not pleased by the productional result, to be honest (and I always try to be honest). With an improved sound quality next time, yet maintaining the very same performance and atmosphere, Vorbkt might release a killer release. Until then our ear drums surely will be satisfied by the unholy tunes on For Silence!