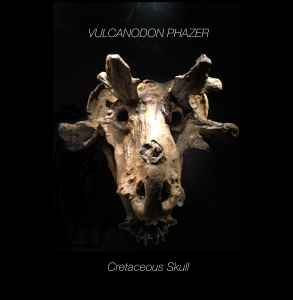 Well, what a surprise. I didn’t see this coming… You know, I know Patrick Mytron as the (sympathetic) guy behind joyful projects like Avitas and Kabexnuv (for both of them, I did write some reviews in the past, so in case of interest, for really great yet raw and rough Black Metal, I invite you to check them out; just enter those monikers in the ‘Search’ tab to read my thoughts on those recordings). Patrick also runs the small and independent label Bud Metal Records, and it is via this label that he recently released the debut album for Vulcanodon Phazer. So, what’s the fuzz? Well, since I am something like a ‘fan’ of Avitas and Kabexnuv, I did expect another blackened oriented project, for Patrick is part of the Vulcanodon Phazer line-up. But believe me: this shows a totally different side of this guy’s musical raison d’être! I will come back to this immediately.

Cretaceous Skull was written by Patrick, who took care of production and mix too. On this album, he performed most instruments (vocals, rhythm guitars, drums, basses, synths and Theremin), but for this  occasion he has been assisted by Lex Hill, who has also been doing some vocal parts and most guitars leads. I did not know this person, but he seems to be a professional colleague of Patrick, and he’s quite ‘famous’ in Canada (or at least some villages out there, haha) as guitar tech for some (local) Hard Rock and Stoner bands. The duo did record this material at the British Columbian based Odin’s Den Studio (indeed home to Kabexnuv and Avitas) in between November 2018 and January 2019.

Do not expect Black Metal whatsoever this time, for Vulcanodon Phazer was formed (and will continue this way) to pay tribute to the Stoner / Doom / Space scene, a mutual passion for both members involved. The fun starts with Heather Hustle And Cherry Fast, opening little psychedelic and twisted, with hints of Pentagram, Uriah Heep and Black Sabbath initially. It comes with ultimately heavy and megalithic riffs (Sleep, Black Sabbath, Saint Vitus, Yob and the likes), including totally spacy effects (hello Hawkwind!), loads of elements inspired by late-Sixties and Seventies Rock (Led Zeppelin, Pentagram, Deep Purple) and rather modernised frenzy à la Kyuss and Monster Magnet. Isn’t that a great introduction, an invitation to go on? I thought so…

Actually, Vulcanodon Phazer cannot be considered a renewing act, yet seen the varied sources of inspiration, mingled into an own concept, this duo is like an entity existing on its own. The mainly lengthy tracks on Cretaceous Skull somehow balance in between predictability and wonder. Both members focus on the essence, on basic structures and a monumental heaviness, rather than creating something progressive, for the latter would be like a betrayal to the essence of trippy, druggy hallucinosis.

The string section is enormously and intense, traditional in performance, but heavily balanced, with little simplistic yet pounding melodies. Both leads and rhythm guitar melodies are equally balanced in performance, giving that esoteric (got it?) panache to their specific identity. Sometimes it is sludgy, then again droning, yet always colossal and thundering. Guitars and basses are supported by improvised drum patterns, sometimes even unprepared, it seems, yet that shows the spontaneous attitude of this project. Spacy and hallucinatory additions strengthen the gloomy, hazy, smoky atmosphere. And then you have the vocals: unclean, unstable, false, yet oh so appropriate and fitting.

I just feel like I have to mention the piece THC Speedwagon. Noise electronica, astral and extra-terrestrial to the core, and a fabulous intermezzo. No more comment on the matter… Yes, like all the album, don’t take it too seriously; just enjoy…

PS: the lyrical side is inspired by science fiction literature, cf. authors / writers like Robert E. Howard, Philip K. Dick or Frank Herbert. Indeed, this too fits to the whole psychedelic concept.

As a Black Metal fan, I am pleased that Patrick will continue with Kabexnuv in the future, and he’s preparing one last Avitas recording too. But any stoned, excuse me, Stoner / Doom fan will surely be grateful too to notice that Cretaceous Skull was only a first effort by Vulcanodon Phazer, because the duo will continue their quest to pay tribute to the likes of Kyuss, Sleep, Orange Goblin, Monster Magnet, Acid Bath etc. All hail the mighty Mushroom!