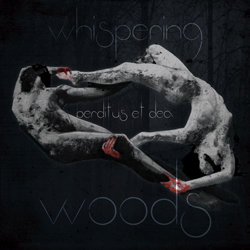 The Romanian Black Metal scene is one I do adore a lot. The Romanian Doom-Death Metal scene is one I do like a lot as well. The Romanian Gothic-oriented scene, however, is one I am not that trusted with. I only know a handful of bands that are worth mentioning, such as Dispersia, Gothic, The Season, Interitus Dei, Serenity and Kratos. So please welcome Whispering Woods, though apparently they did release an album before, Fairy Woods, in 2011 (self-released). Last year the band recorded their second full length opus, and they signed to the new Romanian label Loud Rage Music. This album, Perditus Et Dea, is the first release on that young yet promising label (other signings in mean time: Grieving Mirth and mighty Ordinul Negru!).

Perditus Et Dea lasts for sixty six minutes and opens with the intro Perditus, which is a rather calm, soft-paced piece based on mournful acoustic guitar melodies. But then, when Original Sin starts, the unique structure truly strikes me. Contradictious riffing, heavy rhythms, floating flutes and a strong semi-soprano voice draw the listener’s attention. Soon more gets revealed: many changes in structure and atmosphere, several layers are sort of woven on top of each other.

Brings me to more general information. The vocals are based on soprano and mezzo soprano voices, with almost no grunts whatsoever involved (a very limited injections excepted, as well as some rare male spoken words). These operatic lead vocals are not annoying (in contradiction to, for example, the German scene, where this element bores the sh*t out of me). Okay, I will not stipulate that everyone should like this kind of singing, but there are worse alternatives for sure.

Melody-wise the equilibrium of heavier passages and melancholic parts is quite intelligently executed. The multiple presence of flutes can bother some, but it surely typifies this band’s approach. Together with the vocals and the characteristic composition structures, there is a certain operatic and symphonic touch behind. And what’s more: many pieces are of the ‘usual’ kind, but Whispering Woods are able, without remorse or doubt, to give an own twist, an own approach, an own face to their interpretation of this specific genre, with more than a handful of surprising moments, unique revelations and atypical elaborations.