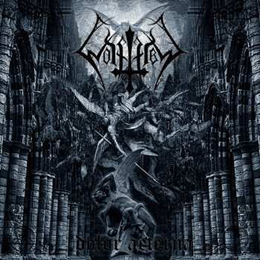 Polish horde Wolftribe were formed almost ten years ago by Satagiah, and the band released a first album in 2008 via the Czech label Radiation Noise Productions (called Pura Odium, by the way). Things went silent for quite a while, but Satagiah (guitars, vocals, drums, music) recruited two new members in order to record the sophomore album, Dolor Aeterna. Together with Ves (guitars) and Tiamath (bass, backing vocals, music, lyrics), he entered the Graveyard Studio once again (the debut was also recorded in this home recording studio), and mix and mastering were taken care of at Sound Of Welding.

Dolor Aeterna consists of thirteen titles with a total running time of about forty five minutes. It brings a pretty technical and slightly melodic, rather traditional form of universal Black Metal with a fierce, unstoppable rhythm section and lots of crafted techniques. The tempo varies enormously, though the focus lies on high-speed assaults. It does remind me especially to the Swedish scene, although Wolftribe are not just a copy of, let’s say, Setherial, Dark Funeral, Triumphator or the likes. Despite comparable characterisations, these Polish guys have an own sound; let’s call it the Polish answer or the above-mentioned one.

I do have a (minor) problem with the programming of the drums, which are sometimes (not always) too curtain-fiery. Also the negation of renewal might be a stumbling stone. At the other, the vocal timbre, the leads and the addition of some slightly weird intermezzos (I do enjoy the interlude Chant Of End Times, for example) are, at the other hand, surpluses. …which brings me to this final conclusion: Dolor Aeterna is a satisfying release, but in an overcrowded scene (which is the case nowadays) this material might not strike. However, I do not think this album needs to be posted into total oblivion!