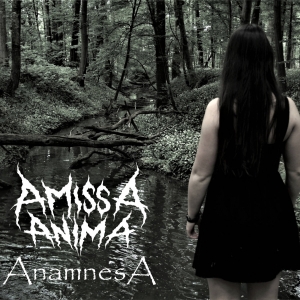 Purely coincidentally, I crossed paths with a project I did not know yet, being Amissa Anima. Investigation (no, I am not some federal agent) taught me that Amissa Anima is a solo-outfit by one Tereza 'Terka' Voglová, a (young) lady from Prague, the capital of the Czech republic. Tereza is the sole human being behind this project, taking care of both lyrics and song writing, as well as the production, the mix and the mastering. Only the artwork has not been done by her - cover picture taken by her friens and logo made by a talented visual artist from East-European soil, Ravenka.

I was impressed when I did listen to some excerpts from AnamnesA, the first collection of tracks as Amissa Anima. So I wanted to go ‘deeper’ into the matter. And now, after a few listens, I am convinced: this stuff is really worth being reviewed by me, myself and I, haha. No, seriously, I think this material deserves at least some attention and promotion, even though it is a non-physical (i.e. digital) release (as for now; apparently there will be a limited edition on compact disc in the (near) future).

AnamnesA is an eight-tracker that lasts for about three quarters of an hour. And seen the titles, joy and happiness are inferior to sickness, death and desperation. Fading To Death, Cancer In Mother’s Womb, Selfdestruction, No Cure, do not expect lyrics about drinking cocktails on a sunny beach, or little children playing, why not, on that very same beach…

The album opens with the track Cancer In Mother’s Womb, which is not an intro, but an indication of what AnamnesA stands for (without the blackened voices yet; just spoken words and whispers). it shows a very melodious approach, with different layers of string, assisted by rhythmic, somewhat traditional, yet truly fitting drum patterns. The speed varies from slow to mid-tempo, which indicates, or strengthens, the melancholic and / or desperate / depressing atmosphere. As from the next piece, Paranoia, on, this approach increases. Melody is a keyword, for the tremolo leads do carry the basic structure of the material, like the spine of some organic construction. It’s nice to notice that several guitar layers are combined into one natural symbiosis. Electric and bass guitars, yet many trem riffs and solo-wise played melodies sort of define Amissa Anima’s identity. Melancholy, despair, pain and hopelessness, yet also anger and frustration get translated by means of those guitar-oriented structures especially. The border with the DSBM scene is nothing more than a theoretical element.

The tempo is, as mentioned, quite slow throughout the whole album. That too characterises the melancholic attitude of this album. The non-experimental rhythm section (which is not a negative formula, seen the concept!) and the unpolished sound (I will come back to this immediately) do support the semi-sadness. And okay, it might not exactly be a surprise, yet dreamlike intermezzi or intros and outros (based on acoustic guitars, cf. a piece like Kill The Light, or done with piano-alike guitar sound modification, for example, like in Selfdestruction) aren’t stranger to the whole experience.

Worth mentioning too is the voice of Tereza. Once again, it totally fits to the whole conceptual approach, with that slightly hysterical, emotional and angry timbre. I would mention Kill The Light once again, to give an example of this statement. Somehow it works as a therapy, for me, and I guess for the front lady as well (and so is the instrumental part too, evidently).

A last word about the sound. This one is rough, unpolished, anti-clean and therefor totally appropriate. Try to compare this material with same-minded projects on, let’s say, Distant Voices or Hypnotic Dirge Records, and you’ll have a sound quality reminiscent of these labels. I think, but that is nothing but a personal opinion, that little more ‘heaviness’ within the final mix could have convinced me even more, but that is nothing but a minor detail. As mentioned before, Tereza did everything herself, including the whole recording and mixing process – no fancy studio was involved. And what’s more: a clinical production would destroy the quality. Who wants a polished sound when listening to this kind of Atmospheric Black Metal? It would be an insult.

Well, for a debut I am enormously impressed. What this lady did create is a canalisation of feelings and emotions, based on personal struggles, losses, disappointments, sicknesses, and what more – I have no idea, but I just sense the urge to canalise negative elements through the creation (writing and performing) of stuff gathered as AnamnesA. Secretly I am hoping for new material soon to come, maybe with a slightly improved sound quality (yet as said: it does not bother me at all!), yet at least as in-depth, honest and recognizable. Recommended if you adore Atmospheric DSBM-oriented stuff.

No light, no joy; just endless obscurity and timeless nothingness…