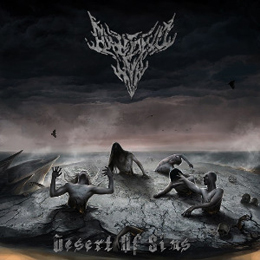 Despite quite some years of existence - Artificum Nex were formed in 2007 - this Russian band didn’t release but one single official thing, the EP Desert Of Sins. This mini-album, consisting of four tracks, was released via one of the greatest labels from Russia, Satanath Records, in July 2013.

Desert Of Sins stands for a (slightly mechanical sounding yet) highly melodic and rhythmic form of Death-injected Black Metal. The melodies sound epic and are based on traditional elements rather than progressive ones, despite the modern production. Sometimes the band comes with pretty technically-performed excerpts, but in general this anti-experimental EP is mainly based on safe riffing and evident, little predictable rhythm structures. The tempo varies throughout the whole album, with slower and faster pieces, but without exaggeration whatsoever. The vocals are enormously fiery and raspy, and the groovy bass lines are very prominent, which is a good thing for they are nice in their support.