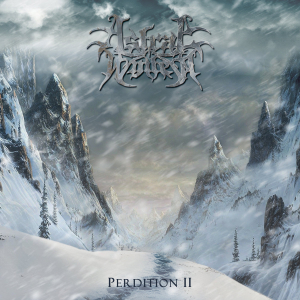 The story of Immortal Frost Productions and Astral Winter are very similar; a relationship with sort of mutual roots. Actually, the label was initially formed by the Australian musician Josh ‘Slikver’ Young, who’s the same guy behind Astral Winter too, a project which he started one year before the label was born. And it was Astral Winter that released the very first recording for (and on) this label.

When it comes to the label, well, that one soon moved over to Belgium, after Josh’s fellow-colleague in Hammerstorm, Surtur, joined the crew. Josh decided not to continue with Immortal Frost Productions as an administrator, but his outfit Astral Winter remained part of this label’s roster. Three full length recordings followed (Winter Enthroned in 2011, Perdition in 2013, and Forest Of Silence in 2016), but then this Tasman-born entity did fade away in silence.

But it with pleasure that I can announce the comeback (even though Astral Winter never officially broke up) of this project, once again via Immortal Frost Productions of course. Josh - you might also know him, by the way, from bands or projects like Atra Vetosus (also on Immortal Frost Productions; this act too has a new release, which will be dissected and reinterpreted by undersigned for sure!), Mazikeen (with a new release on Satanath Records; a review will follow soon), Take This Life or Lost In Desolation - recorded a successor for 2013’s Perdition, and those trusted with that first album under the banner of Perdition might have a clue of what is next to come. Indeed, this has nothing to do, directly, with the Astral / Cosmic Black Metal approach of the other material under the Astral Winter moniker (maybe with exception of the hymn At The Gates Of Creation), nor with any other project this guy is involved with. Although, the lack of happiness and joy might characterize the presence of Josh for sure! After three years of writing and recording, the whole thing finally was finished, fully created in his own Dawnless Studio. Besides a digital edition, there is one on compact disc too, evidently, being a jewel-case CD with four-page booklet; the latter includes sober yet quite beautiful artwork (by some Marko Kozina) (and the extremely limited lyrics too, by the way), which deeply shows the wintry, melancholic atmosphere of the aural side of Astral Winter.

The better part of the album brings a beautiful marriage of acoustic melodies and sounds of nature. These sounds of nature are used in a subtle yet important manner, based on samples of wind, rain, you know, the four elements (or at least some of them), and even singing birds. It’s put at the background, yet undeniably characteristic for the whole sonic adventure.

The main themes, however, are constructed around piano (see next paragraph) and acoustic guitar melodies; the latter breathing a sphere of sad and dark Folk Music. Pay attention: this has nothing to do with Neo Folk or Apocalyptic Folk, but the performance approach is comparable. There is an epic execution, not exactly of the warlike kind, yet still convincingly proud and resolute. The melancholic approach therefor is not of the depressive kind, yet rather searching for revelation and accomplishment. A (short) piece like Crystal Tears is such example, that offers an entrance to the victorious glory of (pagan) pride and confidence, despite the isolationist ambience and the moody identity.

Another instrument used frequently, bringing a comparable attitude of melancholia, is the piano. Classic Fingerspitzengefühl to reach a level of grandeur, touching the border of introspection, twisting with in-depth emotions… Listen for example to Light Of The Cosmos, a grandiose piece based on several layers of wonderful piano play, which guides the listener through dimensions of enlightenment, wonder, and illusion. Towards the end, a dreamlike string section (violin / viola / cello?) joins, and in combination with the noises of Mother Nature, this conjunction works bewitching. Or what about Fading From The Stars, which gathers violin, piano, synths, acoustic guitars and nature samples, canalized into one mighty symphony.

Synths too are frequently used, even though they are used at the background especially. Yet here too, their importance is infallible. Permanently, they add that subtle yet uplifting idea of mesmerizing beauty, then again they do strengthen the icy, misty veil that covers the unphysical, cosmic universe created right here. And one cannot ignore the outro Withering Illusion (excuse me: outro denigrates the magnificence of this last composition). That last track is composed with keyboards (no guitars or piano), okay, injected with several samples. This very captivating sonic poem teases the listener’s emotional state of mind. Enchanting waves of untouchable fairness levitate into a fascinating magic, created by such precious elegance.

As sort of mentioned above, the vocals are strictly limited. Two compositions only come with voices. That’s a brave yet ingenious decision, for it strengthens the mysterious ethos of Perdition II. Dreams Of The Stars has a spoken word input, and even though I cannot clearly understand what the guy is preaching exactly, the vocal timbre works enchanting and enthralling. But that does not matter, because when I read the lyrics, it was exactly that feeling that I was given when floating away with this hymn. A light beyond time, a dawn far from here, all this got plainly revealed. Besides, within this specific track, the hint of thunderous drum beats is a clever thing to do – on purpose or not, yet it does work.

At The Gates Of Creation too has these sermonizing vocals, twisted with a subtle echo. This ballad exhales what this whole album stands for, but it is remarkably heavier too. Once again, the foundation comes with the acoustic basics (piano and acoustic guitars), followed by that intriguing additional narration. But after a while, things turn bleaker and heavier, when organic drums and electric guitars join. Even some blackened screams paint the whole landscapes in shades both impenetrable and ethereal at the same time. I almost do feel cast from creations sight.

One might know the Immortal Frost Productions roster as a platform for overwhelming and interesting Black Metal releases especially. However, in the past, this label’s crew did release some non-Metal material too (Australasia [however, they do cross the border more than once], Horizon …, Nights Amore [for what it’s worth, but the album Subscribers Of Death might be my favourite – or one of the few – non-Metal releases from 2010!]. Somehow, they do have a good nose to smell the finest ingredients in order to offer the most tasteful result. With Astral Winter’s Perdition II, this path goes on…

I am prepared to wait another six years for the third edition within the Perdition series, but sooner, like six more months, will do just fine too, haha!