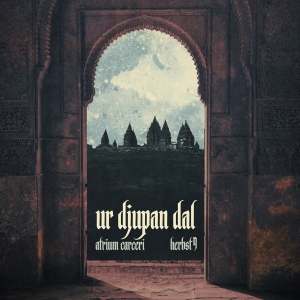 We go back in time. It’s thousands of years before the birth of the Christian messiah. What if a northern soul wakes up in ancient Mesopotamia, at the source of Middle-Eastern civilization? Hypnotic drum beats, naked women dancing around a fire, ritual trance and bewitching smoke… The confluence with Mother Nature and her body-and-soul influencing products, and the first steps into progression from a tribe to a society, war, wonder, sorcery, uncertainty and respect for the old gods, the roots of tribal coherence and the gifts of Mater Terra, these aspects lie at the base of Ur Djupan Dal, a collaborative work of two notorious acts from Europe.

At the one hand we have German duo Herbst9, who started at the end of last century. Sound artists Frank Merten and Henry Emich, also acting under the moniker of Land:Fire, recorded and released some hands full of Ritual Ambient, especially in between 1999 and 2010, through mighty Loki Foundation, as well as via their own label Shortwave Transmission. During this century, there were only few releases, yet in 2017 they came up with another masterwork, being their collab with Penjaga Insaf (also via Shortwave Transmission), the latter being a project that rereleased their debut, remastered, via the very same label). Herbst9 are, by the way, no strangers to ancient Middle-Eastern cultures and nature; cf. their Loki Foundation trilogy Buried Under Time And Sand / The Gods Are Small Birds, But I Am The Falcon / Ušumgal Kalamma.

At the other hand there’s Atrium Carceri, the notorious outfit of Simon Heath, initially known from several fine releases via defunct Cold Meat Industry. Simon is, besides the musician behind some other great projects (like Sabled Sun and Krusseldorf, or formerly in e.g. Knaprika, Abnocto and Za Frûmi), also the guy who runs the (magnificent) Cinematic Dark Ambient label Cryo Chamber, home to some of the greatest Ambient and Drone acts lately (enter the label’s name in ‘search’ to read several reviews I did in the meantime for this label). And it is this label that has recently released this mysterious album called Ur Djupan Dal. Recently, by the way, I did publish a review for another collaboration in between Atrium Carceri and, in this case, God Body Disconnect and Cities Last Broadcast (http://www.concreteweb.be/reviews/atrium-carceri-cities-last-broadcast-g...), in case of interest.

The album gets released via the digital sources (https://cryochamber.bandcamp.com/album/ur-djupan-dal), on CD (500 copies in a six-panel digipack format), and on vinyl (12”, limited to 245 copies); the latter being a pretty new yet attractive (at least for vinyl-adepts) concept for the label. Ur Djupan Dal consists of nine cohesively connected chapters, clocking fifty-five minutes. The beautiful cover artwork shows a first glimpse of the warm, somewhat Arab direction. And that very same cover picture returns in the accompanying (or is it: promotional?) video, static yet with smoke (clouds or water pipe smoke?).

That video is also the visual definition for this album’s opening track, Mot Främmande Land (which means something like ‘against a foreign land’). Oh, it’s such suffocating, ominous opener… It consists of several synth layers, haunting, mesmerizing, floating and darkening, combined with direful, and at the same time fateful, voices, like ill-omened spells. The track slowly crawls forth, permanently evolving and returning, with injections of different sounds, percussions, piano and sighs.

It is within the very same style that Ur Djupan Dal continues. Long-stretched, rich drones and sinister waves of obscure ambience are braided into a thick, misty, poisonous web, twisting with the listener’s mind. Despite a certain monotony, there is so much to experience. From structural side, each composition is built around several layers, subtly intertwined with each-other, painting a desolate, unknown landscape, like a vast desert, or a smoky empty room. At the same time, everything sounds so fecund, prolific, without exaggeration, while still being capable to remain intimate, even devout. You are truly invited to flow away into one’s imagination, and I like to dream about that endless desert, archaic temples and enchanting ceremonies.

Ur Djupan Dal truly is a story, a motion picture translated by aural craftsmanship. Every piece is like a next episode in the protagonist’s adventure, adding those sonic elements that reveal new aspects of this stranger’s experience. Take Ur Evighetens Pipa (‘from the pipe of eternity’?...), for example, almost proggy and erotic, with subtly used percussions and foggy spoken vocals, stepping away from the oppressive obscurity, entering enlightenment and hovering in marvel and wonder. Other pieces provide a rather Lovecraftian grimness (cf. Vida Jättars Väg, with its tribal drumming, those oppressive, gloomy, epic, somewhat orchestral-martial synth lines, and these alienated, creepily spoken fragments from the master H.P. Lovecraft himself), then again it’s like a ritualistic view on the unknown (Drakhuvud, what an hallucinative story, with those esoteric chants), or a semi-meditative journey through man’s own (sub)consciousness (the closing epic Den Döda Trollkvinnan is a good example, with its elegant synth melodies, cold piano tunes, and those mysterious vocals).

This collaboration is such an organic one, for both projects are fundamentally coalesced into a single entity. It resulted (results) in a natural, cohesive, yet extremely brave and adventurous tale that shows the professional qualities of the three artists involved. The album is not exactly a renewing piece of work, but a result of a symbiotic interplay, created with craftsmanship, accuracy for details, and a mutual passion for murky tones of mystified enigma. The result is a successful one for sure…