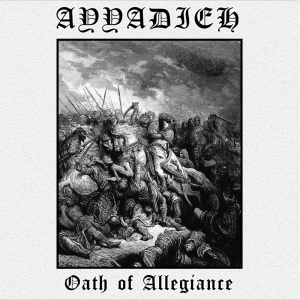 ‘Ayyadieh’ refers to a hill where the ‘noble’ King Richard I aka ‘Lionheart’ did massacre hundreds, maybe thousands ‘enemies’ (women and kids included) at the end of the 12th century. This vengeful thing did happen for real, even-though there is a certain ‘legendary’ veil that covers this story, that glorious expression of revenge against the Muslims (led by the famous sultan Saladin) in a period of conquer and rivalry. It’s a bloodred chapter in history at the time of crusades, marking the blood-thirsty competition of religious fanatism.

The moniker also refers to an outfit from Arizona (indeed, our oh so beloved states of democratic union and stuff…), initially formed by some Obscurus (with grief I just found out that this guy did leave our mortal world to join our ancestors at a memorable banquet with the gods). Oath Of Allegiance is the sole official release, consisting of eight tracks (the intro not included), from which three were part of the 2018 demo-tape too (and which was, FYI, also released via Doomsday Elite). The material was recorded at Primitive Aesthetic and gets released in a sober yet beautiful package, i.e. a jewel-case compact-disc edition (500 copies) with black-and-white artwork (layout by the guy behind Vinlandic Werwolf Distribution) – no lyrics, no member pictures; just a heroic inlay drawing of Richard I overpowering Saladin during this heroic crusade.

As from the start, Ayyadieh show their sharpened teeth to the enemy, bringing a victorious and convinced, fearless form of melodic Black Metal with an old styled and uncompromising execution. It is a varied album, for the hymns do have quite some variation in speed and structure. Though, the latter, that structure, needs some relativization. It is, as said, melodious imprimis, for an important part are the harmonious guitar-leads. No, it’s not that this album gets overwhelmed by air-absorbing tremolo leads or skull-crushing solos. No, this is not a guitar-only-based work. It is the whole interplay of the several strings that sort of works as the fundament: lead and rhythm guitars, as well as the bass-lines. And of undeniable importance, in order to strengthen their coherent position, is the well-balanced mix of all these strings. The lead guitars have that ‘soar’ sound of yore, but the basses are at least as prominently represented.

Also vocals and percussion are nicely representative within the whole concept, with gratitude to that nice sound-quality. Okay, the production comes with a rough, unpolished and edgy intonation, little noisy and primal in essence, but that does fit perfectly to the message of intolerance and persuasion. But it is the mix that pays tribute to all different elements (lead and rhythm guitars, vocals, basses and drums / percussions). The latter, by the way, the drums, are multi-layered in performance: sometimes thundering like a blasting avalanche, then again sludgy in execution, or rather supportive to lift up the epic sphere that arrives throughout the whole of the album. An absolute highlight is that martial intermezzo as from half of the composition Storm Of Blades, by the way! And the voice is of the raspy kind, spitting disgust and undauntedness, spreading the timeless / historical messages with conviction and pride.

I also mentioned a vast variety in speed. Well, that’s another top-element to experience Oath Of Allegiance. Quite a huge part is created around expeditious and energetic constructions. Thunderous blitzkrieg-like excerpts swirl around violent outbursts, convinced to take no prisoner. But as mighty counterbalance, the tempo does slack up (no, not begging for mercy, not ever willing to surrender!) more than once. The variety in tempo sounds enormously organic – no exaggerated breaks or progressive hooks involved – and therefor that well-balanced exercise of different speeds does overwhelm. There are even several semi-doomed chapters too, yet without decreasing the intensity of the concept at all.

Oath Of Allegiance has not been created to reinvent the scene. It isn’t (wasn’t) Ayyadieh’s goal to be renewing or avantgarde. The project did stick true to the essence of sonic intolerance and hateful expression through uncompromising yet honest, and intense + melodious Black Metal in its purest definition. Pure and honest, harsh yet in-depth…