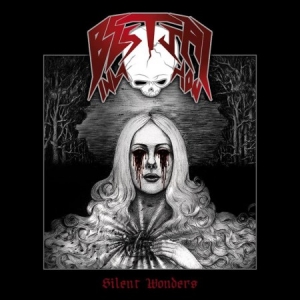 The name ‘bestial invasion’ is quite ‘legendary’, for there are tens of, especially Thrash-oriented bands all over Mater Terra, that are named after the legendary Destruction-demo (more than three decades of age in mean time; can you imagine???!). Now it’s the name of a new band as well from Ukraine, which was formed by former Crucifix / Violent Omen bass player Metal Priest.

However, despite the band’s moniker, this Bestial Invasion does not play one or another form of Teutonic or Deathrash-oriented Thrash Metal. Thrash indeed it is, but created from a completely different angle. The single consists of two songs, an own one and a cover track. Their new track, Silent Wonders, is a four-minute assault that combines a punky groove, melodic progression, experimental craftsmanship and, of course, quite some traditional aspects. It is not only because of the female vocals that this stuff sounds ‘different’ (and you have to admit: there are quite some female ‘singers’ within the scene since, well, eternity…). But this song is a rather specific and unforeseen one within the current scene, if only because of the funky and progressive, yet at the same time extremely harsh and intense, and still highly varying approach. Agent Steel, Mekong Delta and Coroner, and even Death Angel and Dark Angel might come to mind…

The cover song is Morbid Saint’s Damien, taken from the legendary Lock Up Your Children-demo tape from 1988 (a classic!!!), and put in 1990 on the cult-album Spectrum Of Death. The choice might mean that these guys (and girl; singer Unknown Nastya left in mean time and got replaced by a male vocalist) do not eschew to face a harsher side of Traditional Thrash violence too! I really like this approach, and though Nastya’s vocals, which have a certain flair of Dawn Crosby, do not come to their peak. Yet still it is a cool cover.

Finally this: both tracks, as well as the sole tracks from the 7”EP Praise Of Mind, and a (new (?) yet previously unreleased) other piece have been put on tape too in mean time, as part of a split with UK’s Crÿptic Shift. Let’s hope for a (full length) successor soon!