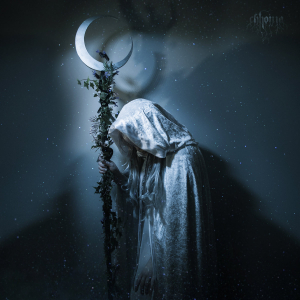 In the ancient Greek mythology, ‘Chthonia’ referred to several personalities, amongst which the mystic ‘subterranean’ deity – but I think the Internet will give you all information you are searching for. And hey, this isn’t a wiki-alike webzine, but a promotional entity for (dark) Aural Art. So let’s get over to the next step…

Also, Chthonia is a project from New Zealand, run by the (beautiful) arboreal bride Moon Chalice. It is a real pity that I do not know much about this project, which I discovered only recently, but it is one of the most impressive revelations within my ‘career’ as ‘fan’ of Sonic Majesty. The project brings, and I stole this quote from their FB-page, ritual-ambient music for Chthonic worship and meditation, and this is a definition that truly says a lot. In 2018 and 2019, Chthonia did record a handful of sonic rituals, in which the visual aspect too is of huge importance. Chthonia too were involved within the soundtrack of the Nocturne Sanctum show UMBRA: Veil Of The Moon (see link below), and this review deals with the latest full recording, which includes some pieces that were part of that show. That show, actually, was the first (and second) live performance for Chthonia.

[FYI: Nocturne Sanctum is a theatre production company from New Zealand, set off and run by lady Nocturness, a close friend of Moon Chalice; for her show Garden Of Lilith in 2018, Nocturness did make use of some Chthonia material, so the choice was made quite easily to have another collaboration, which eventually resulted in the UMBRA: Veil Of The Moon performance]

UMBRA: Veil Of The Moon (the album, not that show I referred to) consists of five elegies, clocking almost forty minutes. It starts with Key To The Moon, a ‘shorter’ composition (clocking four minutes), which is extremely mesmerizing at first. Hypnotic synth layers get initially accompanied by bewitching vocals at the background, yet soon the experience morphs into a ritual invocation, with subtle percussion elements and the obtesting chants and whispers of Moon Chalice. The ceremonial canticle is like the escort to the dimension beyond the fleshly existence, so I bid you to open your heart, for the gates have now been opened…

Next comes Aktiophis (seven minutes of length), which was written for, and performed on higher mentioned show. In general, it goes on, and further, where the introduction led us. Praising the Goddess of the Moon, Aktiophis too combines many synth layers with whispered and enchanting voices. But you sense the urge of inner energy in both atmosphere and instrumentation. With the use of electric guitars (both rhythmic as well as leading parts involved) and somewhat agitating tribal percussion, the vigour of the (grandiose) Viridian Tomb sessions (pay gratitude to the sacred floral gifts of Mater Terra) shows up. The last quarter returns once more to the hypnotic, almost meditative character of the opening sequences, returning to some integer state of mind.

Irkalla is, with its 13:40 minutes of length, the longest hymn on UMBRA: Veil Of The Moon. This track too was written for, and used on the same-named show. This tribute to the Queen of the Underworld (the ancient Mesopotamian mythology is a huge source of inspiration – hail to the Daughter of the Moon) is based on a comparable concept, yet once again slightly differing from both former pieces. The mostly hypnotic piece builds up, step by step, without losing itself in exaggeration. Synths and voices are like the spine, coloured (or darkened?) by hallucinogenic tribal drum patterns and floating guitars. The vocal lines, by the way, are even more diversified, with besides the whispers and spoken words, also some trancelike chanting. Like a tribute to Inanna and Ereshkigal, Irkalla is a composition that has so much to offer, for the many, yet subtly interwoven layers of sound manifest new details each time again. An interesting detail – you’re welcome – might be that no one else but Déhà did contribute with some additional guitar work and percussion. He took care of the mastering as well, by the way.

The fourth track too, Queen Of Blood (9:12), comes from that live gig. Queen Of Blood starts ultimately ominous and abyssal, with howling wolves (Babalon is the lupine queen) and throat singing, before adding the known, ‘trusted’, synth lines and ritual / tribal percussion. Here too, Déhà assisted with additional chanting. Remarkable is the sublime yet very fitting involvement of some blackened screams at the background, covering the whole in a suffocating veil of poisonous mist, ascending directly from the pits of the ancient underworlds. This piece, haunting and disturbing, pays tribute to the Mother of Abominations, via deeply oppressive melodies and obscure song structures. The multiple vocal elements, the huge yet subtle use of different percussional elements, and the different levels of synth hypnosis (plus howling samples) result in an awful, gloomy and direful, yet portentous sonic experience.

The closing ceremony, Key To The Sun, is a new track too, like the opening invocation, and comparable to Key To The Moon in some way. Key To The Sun sounds very serene, little transcendental and even levitating, with that phantasmal yet heavily intoxicating symbiosis of monotone yet abundant keyboard lines and almost fairylike voices. This piece is a very intriguing closer, even though it might be the most integer and floaty one on this album.

Just FYI: there is an official video for Queen Of Blood link below), with Nocturness performing the Red Goddess (a tribute to Babalon, and released specifically to pay homage to the shadowy penumbral lunar eclipse in early January). And apparently, Moon Chalice / Chthonia is working on a third Viridian Tomb album; I wonder which beautiful marvels of Sister Flora (yeah, whatever) will be represented (read: utilised) this time (a professional appearance within the pharmaceutical sector, a long time ago, and a mutual taste of interest, tease my curiosity…).