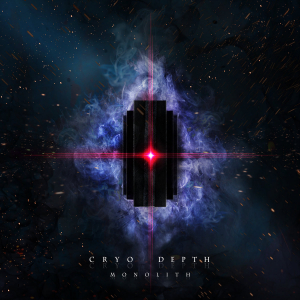 Not that long ago, I got in touch with a young lady from Belarus, Olga Kann. I didn’t immediately recognize her name, but still I had to know some of her works, for she is quite ‘famous’ as visual artist (besides painter / drawing artist, she’s also photographer and sculptor, by the way, with a very open-minded artistic vision, drawing influences from different angles). She did some artwork for bands like Monumentum Damnati, Zdan, Stromptha, Engraving Insanity, Dwellstorm Borned and so on.

But the reason that I discovered this damsel’s existence was a sonic pleasure, an aural expression of her concerning one of the most tragic things that happened last century after the second world war: the Chernobyl disaster. Alarm Call 1986 was a one-track EP that Olga wrote and released very recently under the moniker of Cryo Depth. You will find the link for my review on that debut below.

As Cryo Depth, Olga recorded another sonic thing too, called Monolith. Once again released independently (link to the Bandcamp page below), Monolith became a two-track album that clocks almost thirty-two minutes. Once again the artwork is very impressive (what else did you expect), fitting smoothly to the concept of this recording. Monolith is like a representation which is (quote) immersed in the cryostasis of eternal gaping void. Do you feel the huge expanse, the endless infinity of time and space?

The first piece is called The Source Of Oddity, and with its length of 20:42, it is the longest track out of two. And just like the open-minded visual approach of Olga’s creations (see the first paragraph), the sonic one too takes influences and inspiration from a wide palette of possibilities and opportunities. The Source Of Oddity starts with a bleep, indeed, soon followed by esoteric and meditative noises, and step by step new elements join the party. Initially, the experience dwells in somewhat shamanistic-hypnotic spheres, mingling ethereal ritualism with transcendental contemplation. But it grows, when manipulated sounds, cosmic noises and psybiental elements get introduced. It is like a trip through the unlimited vastness of outer space, through dimensions beyond knowledge, and through timeless eras beneath the void. Okay, I admit that this description might seem manipulative and abstract, but so is this Music for sure.

Twenty minutes of length might seem hard to endure, and it surely is an adventure to get through this first epic. And yes, it will need several listens to comprehend and understand the aim. But endurance might gratify. Each time again, new things pop up, suddenly arise, and fade away once more. It is like searching for the source, the core of oddity, and this via spacy electronics, spiritual ambience and disturbing drones. Besides, the last quarter intensifies the psychotic experience, when additional layers of electronic management and spacious synth distortion cover the initial ‘melodies’ and structures with horrifying and agitating disturbance. But never (not ever) you feel like this whole thing is exaggerated. Despite its length, The Source Of Oddity remains enthralling and disclosing.

The other composition, Gaping Void, clocks eleven minutes. The opening sequence is much darker, much more oppressive, even Lovecraftian in a horrific definition. Waves of ominous synth lines, dark and doomed, fade and raise, like a symbiosis of whale singing and haunting autumn wind in an astral format (close your eyes and imagine – and you’ll understand). Despite a minimal, somewhat ‘soft’ sonic execution, the atmosphere turns out to be so heavy, so massively overwhelming, so intensifying in a mysterious way.

Just like the first track, this second composition needs – and deserves – several listens. Each time, new elements and details appear. Especially the use of Grand Piano, subtle yet prominent, at the end, is truly surprising – but it works. So, I can conclude with this statement: I have some kind of ‘smile’ on my face right now. The corners of my mouth rise up, modestly (damn, do I have muscles out there?) but convincingly. No, seriously, this two-tracker is one that needs perseverance and valor, but Monolith turns out to be a monolithic journey that will appease the open-minded fellow creatures amongst us.

PS: Olga / Cryo Depth is currently working on a new album, and you know: I am excited already! I do look forward, but until then, I’ll listen to this one once again…