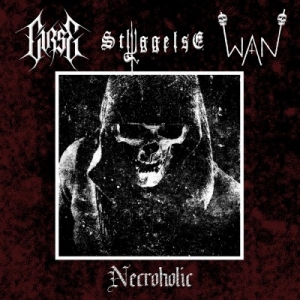 Necroholic offers forty minutes of Black Metal, done by three highly related purveyors of the genre. It comes in an edition of 500 CD’s, politely offered by Russia’s Satanath Records and American labels Black Plague Records and The True Plague.

This soundtrack from the Underworld starts with four elegies by ‘old’ (formed in 1995, initially as Thule) act Curse. It is a project by Iceland-born (now he lives in Norway) multi-instrumentalist Einar Thorberg Guðmundsson aka Eldur, whom you might know as well from the likes of Den Saakaldte, Midnattsvrede, Fortið, Potentiam and some others. For this opportunity he was joined once again by drummer Daniel ‘Tybald’ Theobald (think: Den Saakaldte, Pantheon I, Fortið, 13 Candles etc.). their last effort was the truly grandiose full length Void Above, Abyss Below (you can still check out the review I wrote for that album; it was published on May 8th 2011, and you can find it within the ‘Archive’ - link at the right on top).

In the past this act did always mingle up the essence of the First Wave of Black Metal with a pronounced Thrash’n’Roll attitude. Well, let’s say that this combination now did come to perfection. Take the opener Exploding Head, for example. This is Punk, this is Black Metal, this is Motörhead, early Celtic Frost and Discharge all-in-one. War Of One strongly continues that direction, with that old styled no-nonsense attitude, though it’s remarkably ‘calmer’ and less adventurous.

I think The Observer is a track that stands out completely, for it is totally slowed-down and massive (for one reason or another, the main riff reminds me to the fabulous power of Marduk’s Dracul Va Domni Din Nou In Transilvania), yet without stepping aside from the Punk Rock attitude that characterises Curse’s Black Metal. It starts quite doomish, accelerating during the second half, and sort of erupting towards the end. But Curse’s cover edition of The Ace Of Spades too is top-notch. Actually, I first thought it was a lost rehearsal or live recording done by Motörhead themselves. Curse do not thing something renewing with this (cult) track, but in this case I cannot but agree. Leave it to the essence, and pay tribute to your heroes, that must have been the idea when Curse decided to cover this classic.

The next three lullabies are courtesy of Sweden’s beauties of Styggelse, a sweet quintet with members also involved with, for example, Under Attack, Likblek, Snakeskin Angels and (legendary) Pagan Rites. The band hails from the city of Gothenburg, but they do not represent the typifying Gothenburg sound. …at all…

When Styggelse open their set with Angel Bloodhed, I was expecting to hear a cover of Judas Priest’s Painkiller – what a drum energy! But I was misled. Soon you’ll find out that Motörhead once again will come to mind, but these Swedes come not with the Punk’n’Roll attitude of Curse, yet dwell rather within spheres once created by acts like Venom, Slayer, Sodom, Tormentor and Bathory. The likes of Nocturnal Breed are even more of comparison. This is spikes’n’bullets, booze’n’babes, sex’n’satan supremacy – simplistic and limited to the essence, yet fabulous in honesty and conviction.

The five last pop tunes (I hope these guys are not gonna beat me up) have been composed by WAN, hailing from the city of Eskilstuna, not that far away from Stockholm (you will just have to follow the sunset, and there you are…). This is the first material with new drummer Draup (of Korp-fame), by the way, who does a really great job! Out of the three bands, this one is the least ‘rocking’ one, yet still there is that Eighties energy going on. But more than before, the Nineties approach supremes right here. Overall this material sounds quite obscure and occult, rather than just drunk’n’aggressive, and especially within the slower pieces (like Faun and Dirty Bastards) the band covers everything in a veil of oppression and eeriness. I just think the dense, dull sound quality is disappointing, but I do not think it irritates.

Let’s be sure about this. Necroholic – and actually this title says a lot – houses nothing but primal old styled hymns that pay honour to the origins of the scene. With Curse and Styggelse, we can experience the glory days of Black’n’Roll joy, while WAN rather offers us the nastier side of the Second Wave. In any case, this split will overawe and please grumpy old men that were there when it all started, when we tasted the sweetness of perdition!