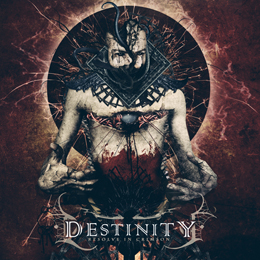 The French horde Destinity celebrated its fifteenth anniversary last year, entre outre with the preparation of album # 8, Resolve In Crimson. This record was recorded again with Jacob Hansen (!) and it features guest vocals by Stéphane Buriez, whom you might know from another great French Extreme Metal act, Loudblast.

Resolve In Crimson (42:40) goes on in the vein of the last album, XI Reasons To See, with nothing less, yet nothing more either (at all, unfortunately), to add.

Resolve In Crimson stands, again, for a modern mixture (cf. Mister Hansen’s influence / evolvement into the final result) of universal (yet specifically European-oriented) Melodic Death Metal with elements from Metalcore and Deathrash, injecting the whole (again) with modern elements like electronics and grooves après-la-lettre.

A surplus is the variation in tempo and intensity. Several parts are as brutal as in the early years, then again the whole is specifically technical or structural, or rather essential-basic when it comes to the combination of Thrash and Death at the one hand, and Old School versus Modernism at the other.

But in comparison to the past, this album is not as enthralling at all. The Inside, XI Reasons To See, these albums did reach the top of the French scene; unfortunately Resolve In Crimson will not. We did hear it before, and most of the time it did sound better, more mature, more convincing, not? And the permanently increasing evolution unfortunately seemed to come to an end with this album.

No, Resolve In Crimson isn’t a f*cked-up bull shit release; I have not initiated any allergic reaction when / while listening to this record; but this certainly is a major disappointment in comparison to the past. Quelle tristesse…