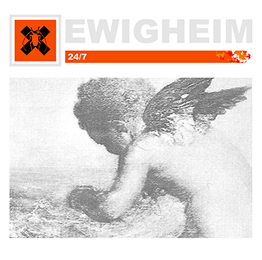 This new Ewigheim-album is to celebrate the project’s 15th anniversary. For a discography and biography, I’d like to refer to the reviews I did for the former recordings, Nachruf (see update January 6th 2014) and Bereue Nichts (posted on October 31st 2012, available within Concreteweb’s Archive).

24/7 brings Electro Rock with hints of Rammstein, if you want to. I make this comparison 1) for everybody knows this popular band, so it makes it easier to compare, to have an idea, and 2) because the lyrics in German, with the ‘warm’ voice and rolling ‘r’-tone on top of it, are very Rammstein-alike. This fifth album is a collection of catchy, poppy, sometimes even danceable new (or previously unreleased) songs, a cover track and several remixes. The new songs still come with that Dark / Gothic-vibe, though it sounds even more mainstream than ever before. And I can’t get away from the idea that Schneemann 2.1 sounds heavily inspired by Chris Isaac’s Wicked Game??? The remixes are created by the minds of Slovenian Industrial-Kult Laibach (an intimate, integer version of Heimweg), Berlin-based Electro-Gothic act Soko Friedhof (a quite impressive interpretation of Die Augen Zu), Bluter (Nachruf; only on the digipack-edition), and Neue Weltordnung (with an EBM-oriented remix of Morgenrot), a (new?) project with Martin Schirenc involved. The cover song Der Tanz Der Motten is done by Sun Of The Sleepless, another project of Ewigheim’s Ulf Theodor Schwadorf (aka Markus Stock), who once again took care of production, engineering, mix and mastering at his Klangschmiede E Studio. This version has some nice passages, I must admit, but it does not influence my general opinion about this anniversary-release: too clean, too poppy, too empty.