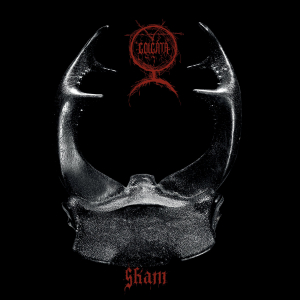 I had not heard of the band Golgata before, a project that consists of members Spokesman 1 (guitars) and Spokesman 2 (bass, vocals and guitars). Seriously? But you know; whatever these guys call themselves, it is of no importance. Even if their artist’s names were ‘Trump and Putin’, ‘Corona and Sars’, ‘Black and White’ or ‘Gol and Gata’ (or ‘Aleksey and Korolyev’, haha), it wouldn’t actually matter. What matters is this: Skam.

I think the duo did record / release one EP before, called Trälen, and Skam is Golgata’s official full-length debut. The duo took care of recording, engineering and mastering themself, and the album gets released via Saint-Petersburg based label Satanath Records.  It’s a jewel case edition, being printed in 500 copies, which includes an eight-page booklet with the lyrics (in their mother tongue, Swedish). The artwork is quite specific and special, being black-and-white pictures of, what I think, are teethed jaws and the antlers of a lucanus cervus, some kind of stag beetle – but I can be wrong, of course. But that too, like the members’ monikers, does not matter. As said, what matters is the sonic side of Skam (which means ‘shame’, by the way).

Skam consists of eight tracks with an average / normal length (in between three and six minutes) (total running time: thirty-six minutes). Their adventure starts with Förrädiskt Vaggas Vi Till Sömns, which opens with an epic acoustic fragment, soon joined by electric instrumentation and percussion, and eventually, after about one minute, joined by a harmonious choir. Pagan / Viking glory overwhelms. Hail!

And such introduction indeed is the omen for the rest of the album yet to come. Skam brings rather traditional and timeless Pagan Black Metal, with a melodic basement when talking about the main leads. And in the vein of this specific genre, both members know how to use the necessary ingredients in a mostly effective way, to create a product that won’t bow to the vast scene.

All epics have a very varied structure. There are those pumping, pushing parts, harsh and fearless, with a great diversification in speed. The better part is mid-tempo oriented, not that fast yet not totally decelerated either. Yet more than once, things sort of burst out, like a pyroclastic eruption. As counterbalance, then again, there are quite some slow fragments too, which are at least as powerful and dauntless. Another fine detail – no, sorry, it is much more than just a detail – is the penetration with acoustic chapters. Okay, it does typify the scene, but why not anyway. These acoustic intros and intermezzos are quite varying too, with integer moments, picturesque ones, and belligerent chapters. The calm before the storm, or the introspective moments of rest in between two battles, you know.

The main vocals are grim and raspy, and they do fit to the glorious / victorious character of the concept. Actually, Spokesman 2’s voice sort of sounds like a warranted spokesman indeed to motivate his troops. Fine. There are some deeper growls too, once in a while, and a couple of fragments with spoken words, but at least as important are the choir chants. They are harmonious, epic and bonded-as-a-pact (can you imagine the picture of warriors gathered around a campfire?). Absolutely not original, but as said, this defines the scene, and when used correctly, it is nothing but respectful to experience. I do not dissect anything exaggerated nor fake, for Skam breathes something that might refer to some of the earlier bands from Scandinavia for sure (and then I am referring to Norway and Sweden especially, era Nineties).

Only appearing sporadically, yet simply attractive, is the subtle use of some keyboards – nothing I am going to delve to deep into, but listen to a hymn like Janus Spegel and you’ll understand…

The production is all right. Nothing more than that, yet nothing less either. The whole sounds unpolished, which I do prefer rather than a surgically clean sound, of course. However, I think that it could have been perfected a little more. Especially the rather ‘full’ parts come with a slightly murmurous background noise, and unfortunately the rhythm and bass guitars sometimes disappear in the whole mish-mash of sound. No, I am not going to pretend that the sound quality is beneath acceptance, for it is not bad; I am just referring to the fact that I might prefer some more balance and less ‘buzz’. But then again, this isn’t but a minor detail – yeah, I am just nagging like a frustrated aged peasant, but fair is fair.

Anyway, Skam, which means ‘shame’ as mentioned before, is nothing to be ashamed for! It represents the glorious heroism of Old with pride, conviction and persuasion – no fear, no cowardice, no surrender! Up to battle! Up to victory!