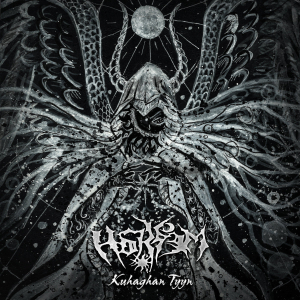 Haissem is a solo-outfit by some Andrey V. Tollock, whom you might know from another one-man army too, i.e. Doom-Death project Sunset Forsaken. Haissem however is more productive and diverse, and throughout six years of existence, more than a handful of somewhat differing recordings got released. Amongst those last year’s Kuhaghan Tyyn, available physically via Saint-Peterburg’s Satanath Records. And just FYI: the project did record + release a new album in the meantime, Philosofiend, in a partnership of Satanath Records and Exhumed Records. A review on that new album will surely follow.

But first things first, and that’s Kuhaghan Tyyn. It is the fourth full-length under the Haissem moniker, being written, performed and produced by the project (= Andrey). Recording, mix and mastering were done at the Vetkin Records Studio over a period of a year (late 2018 – late 2019), with additional programming and engineering by Vitaliy Dorofeev (who worked with Sunset Forsaken, as well as, for example, with Eydol, InGrave, DeadShade, Khranitel’ or Kreolis). The CD edition comes in jewel-case version with a four-page booklet, which includes the lyrics (in English) for the four lengthy compositions. The layout was taken care of by label-owner Aleksey Korolyov, with quite cool and intriguing artwork provided via Hellcatfairyart (Mary Kankava; think: Ragnell, Thorns Of Grief, Fucker, Serpent Sermon, Mourner a.o.).

Kuhaghan Tyyn consists of four songs, which do have a total running time of almost forty-four minutes. It means ‘the evil spirit’, by the way. The album starts with Black Tide Dominion, which opens with a short and somewhat Pagan / Folk-inspired acoustic intro. Yet soon, Haissem show what they stand for: atmospheric, bombastic, melodious and timeless Black Metal with an enormous and well-executed technical approach. The material is strongly guitar-oriented, with tremolo leads, solos and guitar-driven melodies as spine. There is a huge variation going on, with lots of changes in tempo and structure, and including quite some breaks. Seriously, it is remarkable how different all passages and chapters are, yet at the same time including a firm cohesion, organic and mature in nature. And compared to the former material, that progression is even more pronounced.

Other elements of that impressive variety are, for example, the use of not that unusual instruments (like acoustic guitars, cello, keyboards and mouth harp) and voices (whispers, harmony choir singing, clean voices, spoken words and (semi-operatic) female vocals, besides the main vocals / screams, which are quite throaty and shrieking). And you know, it fits. Okay, this material is enormously catchy, and that’s why the addition of these elements (both vocal and instrumental) are appropriate for sure. Kuhaghan Tyyn must be considered a Black Metal opera, a theatrical or dramatical tale, injected with elements from related genres, such as Melo-Death, Epic and Gothic Metal. Therefor the result sounds universal and timeless. With the latter, I mean that this album is not exactly inspired by the First or Second Wave exclusively (at all). It has a modern touch of execution, yet without turning into an over-fabricated avantgarde thing either.

The sound quality is very decent for sure. When you analyze the mix of all individual vocals and instruments, you can easily dissect each of them. Even though this album is, as mentioned before, strongly guitar-based at first, all other instruments are so well-mixed into the whole. Too often, guitar-led material reduces the rhythm instrumentation to inferior levels, but here all ‘background’ instruments are clearly audible. That’s a cool thing, evidently. But hey, it might seem that I am just looking for something negative, but even though it is purely personal what I’m going to add, but I do miss a certain roughness somehow. Okay, a semi-complex and theatrical album like this one goes better with a ‘clean’ sound than a primordial one, but maybe it is a little too polished. Yet as said, that isn’t but my personal opinion, so you do not need to agree.

Some passages are quite epic in essence, others rather focus on dramaturgical spheres or, then again, a harsher and more powerful attitude. I would like to refer to the track Aokigahara especially, for this one gathers about all angles and visions that characterize this album (note: actually all of them do, cf. the lengthy duration of all four compositions on this album). This album must not be considered an expression of ‘traditional’ Black Metal. It’s rather a dark opus, a grotesque narrative. I must refer as well to the textual side, which is totally fitting to the sonic side. The choice of words and sentence constructions is surprising (as said in English, with modest fragments in French, German and, if I am not mistaken, Kyrgyz). The content, well, that’s up to you, but it is a nice read for sure.