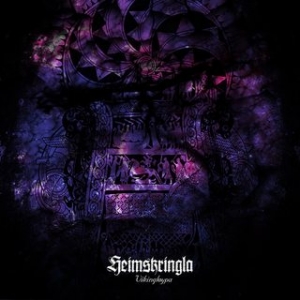 First some Ivanpedia: ‘Heimskringla’ is based on mythological sagas from the thirteenth century, written by Norwegian ‘skald’ Snorre Sturluson, and dealing with the glorious kingdoms from Norway and Sweden during the ninth up to the twelfth century. But since this label is not an encyclopaedia, etc…

Heimskringla is also the name of a new one-man project by an American multi-instrumentalist who calls himself Niðagrisur. The whole concept behind the Heimskringla-debut Vikingløypa is based on the sagas from the era as mentioned in the former paragraph. Initially Vikingløypa was released the digital way on June 30th 2015, soon after it was followed by a CD-edition in 500 copies via, once again, a collaboration in between Outer Line Prod. and Silent Time Noise Rec. (a sub-division of Satanarsa Records).

The album consists of three ‘songs’, yet all together it lasts for more than seventy minutes: Skandinavia (45:40), Vikingløypa (20:19), and Islenska Vatnid (6:40). Vikingløypa (the album, not only the song) brings floating-atmospheric yet extremely suffocating and ominous Melodic Doom-Death / Funeral Doom Metal, based on ultra-heavy riffs, eerie synth-scapes, a monumental rhythm section, haunting leads and ultimately low-tuned grunts. It’s like a mixture of earlier Ahab, Monolithe, Until Death Overtakes Me, Trails Of Sorrow, Fuoco Fatuo and Urna, to name but a few. Yet then again, I surely do notice some elements reminiscent to the likes of Evoken or Esoteric (!) too, giving the whole sonic travel (and seen the length of the compositions, it indeed is a journey the listener has to / deserves to trespass) that little distinctive.

Actually, seen the crazy, exaggerated length (especially of the first piece, as well as the second one), the whole sounds like one long dreamscape, like a sonic experience that touches, and crosses, borders of both introversion and extravagance, of both tranquillity and enervation, of both peacefulness and hatred, of both contentment and despair. It’s pretty rare how natural it seems to combine all these extremes, at least translated through such lengthy creations. I know that I can be quite enthusiastic (just imagine... but It's just a bold statement I want to make) from time to time, but a monument like this album cannot be ignored; it must and will not be ignored… There are so many levels, and this does not go for that extremely lengthy first track only. Rather ambiental synth-passages go hand in hand with guitar-driven excerpts, down-tuned Doom-chapters perfectly interact with hypnotic and funereal melodies, and so on… And on top of it, there is a huge cohesion within each track, and quite a cool differentiation in between the three pieces. The title track, for example, is at least as varied as the opening creation, but the approach and atmosphere are much more psychedelic, mesmerizing, hypnotic, even blackened, if only because there are even more profound synth passages that blacken the whole atmosphere.

Before getting to closure, I just need to add something about the production. This one is dense, misty, even muddy and low-tuned, yet it perfectly strengthens the inherent attitude this kind of Aural Art needs. Or: great sound, fitting to the essence and atmosphere of this album. Highly recommended!