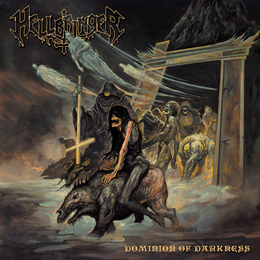 (why still writing a review on a release that came out more than four months ago? First of all, because we did receive this material very recently, and secondly because this stuff is much too tasty not to take a bite…)

Australian three-piece Hellbringer was formed in 2007 as Forgery. To avoid confusion, and law issues, with Norway’s Forgery, the band decided to change its moniker into the current one in 2010.

Some might know this band from the Forgery EP, released in 2010 through Iron Pegazus. As a matter of fact, it’s the re-issue of the sole official Forgery-recording, originally done in 2009, with inclusion of two bonus tracks. That means that Dominion Of Darkness is the first ‘real’ recording under the name Hellbringer. The stuff, by the way, was engineered by Harris Johns, who did some studio work with great Thrash bands like Kreator, Destruction, Fatal Embrace, Sodom or Tankard, to name but a few.

Dominion Of Darkness stands for a rather universal form of barbaric, rhythmic and melodic Thrash with prominent Old School vibrations. The main source of inspiration must be the European scene, I think (read: the German one specifically), but Hellbringer do not just copy Kreator, Venom or Sodom. There are different elements that remind me to the American scene (think: Possessed, Havok, Nocturnal Fear, Dekapitator, …) and, of course, the Australian one (Deströyer 666, Armoured Angel etc.). It certainly means that Hellbringer are not the most original or creative band ever. On the contrary. But at the same time, in spite of a couple of predictable elements, the joy these three guys offer, and the professional spirit, turn this album into a mostly interesting one for all fans of the genre. Every single song makes love to my thrashed eardrums; I’m having a nice eargasm when listening to this material, and that’s what counts. Skip trying to be original if you’re able to outreach the grey masses!