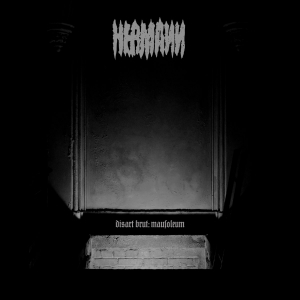 The story of Hermann starts in 2014, when four musicians joined forces. Amongst them are former or actual members of e.g. Sunshine And Lollipops (oh, I do like them; I did publish, by the way, a review for their Empty-album and their split with Wigrid, both released on Bleeding Heart Nihilist Productions), Essenz (their album Mundus Numen is one of my favourite albums from the Svart Records roster; review also still available on this site), Krüppel or Necromorph. The small Berlin-based label Raddatz Records released Hermann’s debut Prinzhorn Kolloquium in June 2015 (with a re-release on tape by ‘Unconventional Underground Art’ label Bleeding Heart Nihilist Productions one year later), and shortly after the band started working on new material that was meant to be part of their sophomore release.

This stuff got eventually recorded at the Englsound Studio (Ruins Of Beverast, Essenz, Sonic Booze Machine, Drowned, Early Death, …) during Summer 2017, and it got mastered by Jan Oberg (Hidden Planet). The result is called Disart Brut: Mausoleum, and is a vinyl-only release 12” (300 copies available); yes, there is a downloadable version too, of course. The album consists of seven tracks, clocking about thirty-seven minutes, and done (lyrics / vocals) in the band’s mother tongue.

Disart Brut: Mausoleum opens with the intro Intrauma, which is a very disturbing, even claustrophobic and weird thing, dissonant and eccentric, with noises, sounds and samples (like militaristic melodies from, I think, WWII, and recorded voices), and synths + percussion. But as from Pervitin, Hermann show their sharpened teeth. It’s like an unholy hybrid of Doomcore, Crust-Punk and (Black) Metal, even including elements from old schooled Death Metal, Grindcore and Hardcore-Punk. There are more bands that try to achieve a symbiosis of those related yet, at the same time, contradictory / contradictious styles, but Hermann surely found their own, organic, way to express this. There is so much to experience in this track (and it isn’t but the first ‘real’ one, so there’s much more to come), with a huge variation in style and tempo. When talking about the latter, well there are slow passages, mid-tempo ones, and blasting excerpts. And you know, it’s done so meticulously precise and oh so naturally consequent. This actually goes for all pieces on this album, by the way.

Next piece is Der Marder.Angstmilch.Amputation, and WTF (not WWF, for this stuff is simply flesh-ripping from the bones without sedation). The biography (from Bleeding Heart Nihilist Productions) somewhere mentions Bethlehem as a source of inspiration, and well, in some way I understand this comparison. This piece is a merciless brain-smasher, groovy and sludgy (listen to those guitar / bass melodies), with those truly filthy grunts (singer Jennerjahn better holds his teeth on to each other, for otherwise he will spit out his lungs) and that nice interaction in between grinding excerpts and doomed-out passages.

Herz Ungewolft is like a pyroclastic eruption, an all-ruining Death Metal attack with a Crust-excerpt in the middle. The better part gets carried by militant and merciless drum beats, dual vocals (especially those filthy grunts, and some screaming throat-vomiting) and right-in-the-face riffs, although the latter are consequently melodious in structure too.

A hint of Darkthrone or Necros Christos, finally, appears in the short sonic assault Zitzenwald, with its coil-black character and psychotic attitude. It might be the most gruesome and grimmest piece on this gruesome and grim album…

Die Pauke 4 Mal seems to be a reinterpretation of an older traditional death song (dirge) from Eastern Europe, and it sounds as foul and dingy as, well, what about the result of a blaspheme marriage of Asphyx, Autopsy and Goatlord… This is Doom the most soiled and sordid way, also definable as ‘waw’! Quite the same greasiness reveals itself in Schaedelbourgh Halbmast, the last piece on this album. The latter has quite some psychedelic guitar lines, without exaggeration or absurdity. And what a lunatic outro, haha…

No further comment. Just this: you’ve been warned, for this can cause incurable brain damage.