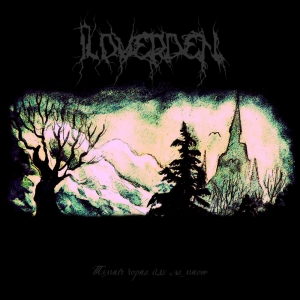 Ildverden are a rather productive solo-project from the Crimean peninsula, Ukraine, that now release a fourth studio album, this time in a constellation of US-based (and underestimated) Pagan Flames, and Russia’s finest Satanath Records. Темніч чорна йде за мною aka Temních chorna yde za mnoyu. It comes in an edition of five hundred (regular) CD’s, and it consists of five lengthy compositions, four of them lasting in between eight and eleven minutes, and one clocking nearly twenty two minutes.

Lengthy tracks might refer to repetitititititive structures and long-stretched melodies (which isn’t necessarily a bad thing!), but that’s not completely the case in here. Okay, for a part it is, but Ildverden do not dwell within the DSBM or Atmo-spheres like many acts do (acts that bring such long-stretched material). It’s not that this project, therefor, is more varying, because the scenes I mentioned do not necessarily lack of aural diversity. It’s just that this act brings very long pieces that must be labelled as melodious yet highly grim and cold Epic / Pagan Black Metal.

Despite the continuously self-repeating structures, the variation lies in small elements: the addition of cool tempo-changes and some unexpected breaks, the ominous synth parts, the symbiosis of paganised tradition and timeless melodies, or the Nordic-styled influences contra the Post-elements. I know it might be difficult to comprehend if you haven’t had the opportunity (yet) to listen to this album, but once you do, you’ll understand.

Some remarks must be made, like the poor creativity in song writing and the inferior sound and execution of the drum (computer). I think it’s a pity too that there are quasi no memorable excerpts either. I usually adore long compositions for the completion of it, but here I think it’s rather a dysfunctional concept.

But I might be somewhat too severe right now, for actually this album isn’t that shitty at all. There are ups and downs, none of them seen from their most extreme approach, and especially the slower passages (though that isn’t but an objective, personal opinion) are quite interesting.