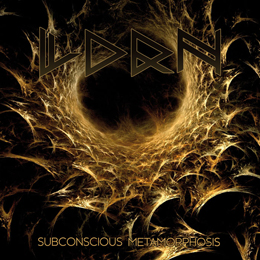 Lorn are an Italian band that were formed more than a decade ago. They released an album in 2006 (Towards The Abyss Of Disease via Eerie Art Records) and some really splendid splits (!!!). The trio recently signed to one of my actual favourite labels, I, Voidhanger Records, in order to release the second full studio record, called Subconscious Metamorphosis, an album with a total running time of an hour.

Subconscious Metamorphosis is a step forward, even though within the very same vein of any former material. The album brings a claustrophobic and suffocative, slightly mesmerizing form of technically dissonant Black Metal with a hammer-droned sound and an eerie, pretty uncomfortable production. It comes with a repetitive approach, dissonant chords and an omnipresent Post-vibe, bringing stuff from acts like Battle Dagorath (frontman Radok is involved with both these two sublime acts, which attests this comparison easily), Deathspell Omega, Glorior Belli, Blut Aus Nord, Merrimack, Disiplin or Gorath, and even Svartsyn to mind.

Despite the enormously fierce, fiery and foggy aggression, the speed-variety is well-done, for balancing in between blasting eruptions and semi-sludgy decelerations, with everything in between. And this contradiction in extremes goes as well for the melodies (technically constructive versus nihilistic primitive) and the song structures (from chaotic and apocalyptic to even more chaotic and apocalyptic). Some parts even include the most chilly, austere and oppressive Obscure Ambient / Industrial elements that characterise projects like Swartalf, Desiderii Marginis or De Infernali. Besides, the interaction in between instrumental passages with a focus on ominous and hypnotic obscurity, and cosmic blackened bleakness from a mostly obscured metalized point of view, is of an exceptionally superior level.

Once again I, Voidhanger Records come with a top-product that will please every fan of Blut Aus Nord, Gorath, … …anyway, just look back at what I just wrote and make your own conclusion.