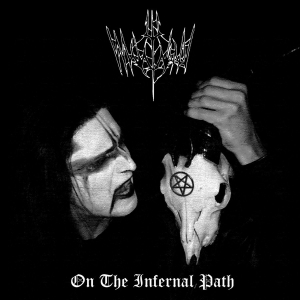 ‘MabThera’ is medicine based on the active component rituximab, as well as a Hungarian Black Metal project based around Tibor Terebesi. The band did record one single album in 2012 - 2013, but that self-release (2013) now, finally, gets the promotion it does deserve; once again thanks to Aleksey from Satanath Records. It gets re-released via a collaboration of Symbol Of Domination Productions (a sub-division of Satanath Records), Metal Throne Productions and Dark East Productions (they did work together several times before).

On The Infernal Path stands for an inspired yet non-original (I know, it’s a contrast, but very to the point) form of Traditional (Second Wave-styled) Black Metal, based on both the heaviness of the rhythms, as well as the melodious aspects of the leads. There is a certain groove within the performance, somewhat catchy (in this project’s case catchiness does not mean poppiness!!!) and accessible (not meaning: easy in approach). But somehow Mabthera seem to dwell within rather misty and primal dimensions and grim, even occult spheres, naughtily flirting with the Black-Thrash scene and the Nordic scene. For sure this material isn’t the most violent stuff you might have heard lately, yet still it makes your head bang most of the time.