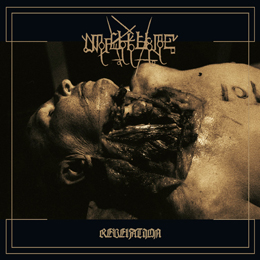 Revelation is the first full length studio album by Malhkebre, despite about twelve years of existence. In the past there was a very limited demo-cassette, an EP (Prostration) and a split-EP (with Aosoth), and that’s it. At the other hand, the band built up a fine live reputation, having shared the stages with the likes of Hell Militia, Antaeus, Ofermod, Embrace Of Thorns, Deströyer 666 etc.

With Revelation, these messengers of the Biblical Truth and the divine words of the Master of Heaven bring thirty eight minutes of so-called Orthodox Black Metal, but I do not really agree with this description (but who am I to re-label such description).

After a short intro (Multi Sunt Vocati), the album continues with In Pulverem Reverteris, which combines technical parts with aggressive fierceness, all covered within a timeless mist (the latter meaning: not old styled, nor modernistic, but something in between and, at the same time, nothing of it at all). It mixes violent Punk-laden Black Metal, blasting Death Metal and elements from Crust, Grindcore, Thrash and Pagan Metal into a furious package of merciless noise. It’s like a soundtrack for War and Apocalypse performed by a horde of Neanderthals.

But despite being released through one of my favourite labels, I don’t get warm or cold by this material. The vocals, rather shouting than blackish screaming or deadly grunting, do irritate my eardrums. Samples like Hystérie Révélatrice Part I (I do really NOT understand the introduction for Part II) or Dogma are nothing but fillers. And the lack of inspiration (≠originality!) and coherence are truly sad.

Only a couple of parts can satisfy me, especially those pieces that seem to combine Deathspell Omega with Mayhem (like excerpt in higher mentioned Hystérie Révélatrice Part II). Unfortunately this happens only a handful of times throughout the whole experience. Also a couple of decelerating parts, like in The Truth Must Be Doubted For Victory, are not that enormously annoying.

The screeching, psycho-grinding production, finally, is way beyond acceptance. It gives me a headache and… No, I’ll leave…