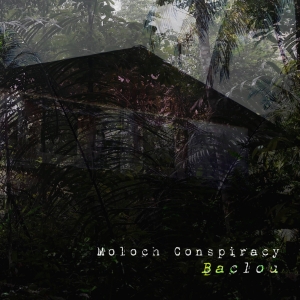 One of the first reviews, maybe the first, that I did for Eighth Tower Records (a strongly upcoming label run by Sonologyst’s Raffaele) was The Cave Of Metaphysical Darkness & Lights (http://www.concreteweb.be/reviews/moloch-conspiracy), released one year ago. And now the label and the project joined forces once more for the release of Baclou, an eight-track registration that clocks over fifty minutes. And in contrast to that former one, or to Kur, released earlier this year via Noctivagant (http://www.concreteweb.be/reviews/moloch-conspiracy-0) (both of them comparable in concept, yet slightly different in structure and performance, though still recognizable), this new one does not deal with the mythology, the cultus of mystery and the religious aspects of ancient Mesopotamia. This time, the bleak approach of those cults have been replaced by the influence of the tropical moisture and warmth of equatorial sources. I’ll explain this.

Julien A. Lacroix, the very sympathetic guy behind Moloch Conspiracy, did visit the northernmost part of South America. More specific, he did visit the primeval forest and jungle of the Amazonia in French Guyana, at the East of Suriname and the North of Brazil. Julien was impressed by the rough yet beautiful habitat, the nature in all its harsh yet intriguing facets, and, as he stated, ‘the fragility of human settlement’. The tribes and villages out there have a specific richness on beliefs, taken from many sources. In the local folklore, the folks believe in the invocation of some evil spirit, a nefarious and viscous gnome, which they call ‘baklou’ (mind the ‘k’ in the local dialects). This unphysical entity can cause mass hysteria, or can be summoned to punish, to harm, to revenge someone else.

Anyway, Julien was inspired by his experiences and sensations out there, though many were lost in his inner self, like captured. Though he recorded and created some stuff, inspired by the environment, the stories he was told, the nature that surrounded him. Besides field recordings, he also used instrumentation both evident and exceptional: synths at the one hand, with detuned piano and cello, even djembe, yet also tama (sometimes called a ‘talking drum’) and malaka (some sort of rattle, a hollow gourd, filled with little rocks and / or seeds). Julien took care of production, mix, mastering, and even the artwork. The latter is based on pictures from his trip. The album, by the way, got released in a digipack edition and via digital sources.

The aural approach, and that might be evident after reading the former paragraphs, differs from the past. However, I have to say that the initial essence is comparable: creating inspiring, somewhat psychedelic Drone / Ambient. So, the basics are taken from a comparable source, yet the actual execution is quite different. This goes, for example, for the use of samples and field recordings. This time, seen the concept / theme / source of inspiration, most sounds are recorded live in Guyana. There’s birds, insects and other beasts, voices, elements of nature, and noises whatever, recorded in the rain forest and jungle, on the islands and their shores, at the savannah and in the swamps. It gives the whole album that additional feeling of ‘natural presence’, no matter when sounding impending or revealing.

The foundation of the epics on Baclou are, evidently, based on atmospheric synth lines especially. Do not expect bombastic orchestration or rich symphonies, for it is quite the opposite. The many synth layers are like floating waves of sound, subtly intertwined or desolately standing on their own. Yet throughout the whole of the album, no matter how subtle and integer it might from time to time, these keyboard ‘melodies’ act like the back-spine of each single aural creation. They crawl forth, ominous and heavy, twisting the listener’s brain with a sardonic attitude. Ah, isn’t that lovely?...

And then you also have the other instruments, used appropriately and decently. At the right moment, the sonic experience gets flavoured by distorted, sometimes even shrieking cello, shaker-alike sounds (cf. malaka – see higher), tribal percussion (like tama, djembe, locally recorded elements), down-tuned piano, and more. Sometimes, in a mostly inconvenient or uncomfortable way, it represents the asphyxiating nature of Julien’s inspirational sources: hallucinations, fever, disarray, inhospitability, vacuity, discomfort, stupor, disorientation etcetera, yet also the richness of the environment and its inhabitants (trees and plants, animals and tribes). And once in a while, also elements from White / Harsh Noise and crackling sound sources get penetrated within this aural journey.

Baclou touches, teases, haunts and confuses our senses and instinct, while accompanying you to archaic, abstruse worlds unexplored, untrodden, unknown. It is like a soundtrack confronting the listener with his / her diurnal evidence and artificial existence. Or in short: another spi/ritual highlight courtesy of Moloch Conspiracy… …a sonic registration of, for sure, one hell of a trip…