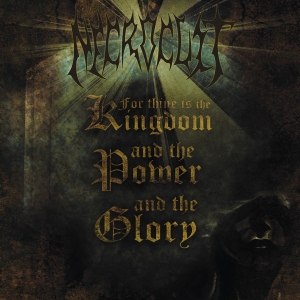 Necrocult… There are several of them… This review deals with the French one.

Actually, this band was formed in 1994 as Crucifix, playing an old schooled form of Death Metal. Yet slowly on, their approach got darker, and the nameless debut album, released in 2003 via French label Snakebite Productions, already brought a more evil-sounding sound (in mean time the band’s moniker changed into the current one).

Now, after more than a decade, the band sets a new step with this sophomore album, still consisting of rather long tracks. Still with the very same line-up (guitar player / vocalist Loran, bassist / vocalist Manu and drummer David), Necrocult bring a quite technically high-profile form of rhythmic and brutal Death Metal with lots of Black Metal elements and a powerful sound. There is quite some melody within the harsh structures, lots of variation (structural and speed-wise), a grooving approach and a well-balanced mix / sound.

Despite quite enjoyable songs, I do miss an own face.

Well, actually, I think I’m ready… Cool stuff, but lacking of identity, persuasion, conviction. The result is way too predictable, and within the current scene one needs ‘more’… Nice try, but better next time, I hope…