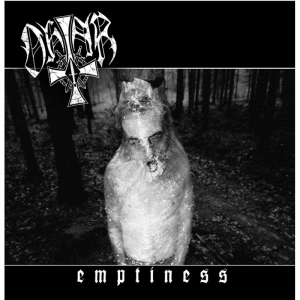 Tolkien freaks will recognize the name ‘ohtar’ as being an esquire of King Isildur, who brought the broken pieces of the king’s legendary sword to the elfish city of Rivendell after some cowardly attack. But it is the name as well from a Polish band which was formed more than two decades ago. Ohtar, the band, recorded some demos and split contributions during the late Nineties and the early 2000’s, and in 2003, Supreme Art released the impressive debut full length album When I Cut The Throat (re-released afterwards on vinyl and tape). Some more demos and splits, as well as two official full-lengths did follow, but in 2012 Ohtar did split up. However, a couple of years later, original member Paweł ‘Necro’ decided to reform this project, and some more material, though limited, did follow.

A partnership of Lower Silesian Stronghold and a couple of other great, same-minded labels, took care of the release of Ohtar’s fifth full-length album, called Emptiness. It consists of five lengthy pieces (in between six and ten minutes of duration) that were recorded during the second half of 2018 by Necro (all strings and voices) and drummer Diathyrron. Both of them do work together in e.g. Dark Fury or Selbstmord too, by the way. The compact disc edition gets released in a so-called ‘jewel case’, including a twelve-page booklet in a glossy, shiny format. The latter includes the lyrics, which are in Polish, as well as the translated texts in English (dealing with happiness and the joy of life, democracy and capitalism, solidarity and asceticism – or am I mistaken?), and some exciting photographic artwork too.

This kind of Black Metal represents the essence of the genre, the pure basics with a timeless and universal approach. It gathers pounding riffs, melodic leads, pummelling rhythms, icy vocals and, well, you know, everything that defines the supreme glory of fearless, angry Black Metal propaganda.

I could end right here, for I have said it all, I have given the core of Ohtar’s existence. The project IS a representation of the glorious and elementary presence of misanthropic and anti-human(ity) blackened majesty.

However, there’s a lot more to tell to. What about the huge variety in speed, for example. You got about everything right here. The better part is not that fast – rather balancing in between somewhat slow and mid-tempo. The slowest passages do come with a very hypnotic character, and then I am referring to the enthralling melodic structures especially. Though being energetic, these chapters paint a bleak landscape of escapism, desolation and disgust, with a huge dose of Nineties-influenced epicism. Besides, several excerpts are fast too, suddenly, unexpectedly bursting out, almost eruptive, full of energy and power. These faster parts are few, but as a counterbalance to the doomed main structures, it does lift the whole up to dimensions beyond sweetness, haha.

The sound quality has an enormous ‘underground’ attitude; I would have believed if someone told me that this stuff was recorded at the (legendary) Grieghallen Studio. Damn yes, that’s a huge compliment! No, seriously, some earlier works of Gorgoroth, Burzum, Taake and Hades (pre-Hades Almighty) may act as point of reference when talking about the sound quality. Once again, this is something I simply adore, for what it is worth. That rough, unpolished sound, adding a level of primal grimness and prehistoric malignancy, it is a surplus, seen the concept of hatred and grudge. But then again, it is remarkable how strong the mix sounds. Despite the unpolished production, the balance of all voices and instruments is immaculate. The bass lines and drum patterns are perfectly audible, the vocals are not arrogantly overpowering; the equilibrium has been perfected with precision.

I think it is important to mention this. Ohtar represent hatred. They support misanthropy and blasphemous ideology. They fight against false multi-cultural limitations and promote the supremacy of conscious intellect. But somehow there’s a depressing feeling going on as well. No, this material is not of the DSBM kind (nor purely NSBM either), but the oppressing atmosphere somehow drenches the whole aural experience in a suffocating fluid you can’t, and won’t, escape from. That too is a remarkable element that defines the magnificent craftsmanship of Necro and co.