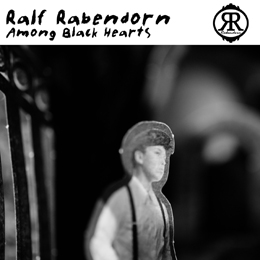 Among Black Hearts is the newest pièce d’art by multi-disciplined artist Ralf Rabendorn: photographer, visual artist, music composer and performer (multi-instrumentalist and vocalist) and studio-guru, but he also runs his own Anti-Music label ContraMusikProduktion, nowadays totally in symbiosis with another great anti-trendy and anti-commercial, open-minded and underground-promotional label, Against it Records. Do not get trendy, don’t limit yourself to, well, limits I think, and do never ignore the importance of the toothbrush…

Under his own name, Ralf has a solo-outfit that trespasses existing, artificially created borders, both musically and lyrically. And when it comes to the latter: mind the cynical, sometimes even sarcastic depth! I will write a review on the great Exile full length very soon (though it was released two years ago), but this stuff deals with a new three-track EP, called Among Black Hearts, which does differ from the past. And yet, still it’s courtesy of this visionary German guy, co-inventor of the MedusaDa-style, focusing on ignoring the fear to experiment. As long as you do not exaggerate, and with inclusion of some intellect, the result might be shocking. And who am I to dislike aural shock-effects?

This gets translated by means of this EP, which is more like a collection of dark-mooded and even melancholic ballads. The opening song Black Is The Colour is somewhat disturbing at first, for it’s mainly based, initially, on minimal piano tunes and somewhat drunk-lullaby’ish voices, eventually joined by modestly funky / jazzy percussion patterns. It’s like Bowie sonically reinterpreted by some Avant-garde Rock outfit, I guess. This feeling gets strengthened by Black Heart, the second song, replacing the initial integrity in order to welcome more Goth-alike expression. Towards the end, the whole turns into heavier proportions, introducing fine-tuned electric guitars, and canalizing this material towards quasi poppy and, at the same time, rocking heights. Once again, integrity and heavy experiment meet flawlessly. With the third track, Light Of Darkness, this evolution goes even further. Not only it’s the longest piece on this EP (clocking nearly six minutes), but it was written quite some time after the first ones. And that’s very audible. Light Of Darkness is enormously emotional (black hearts including! Just listen to those lyrics) yet truly progressive too. Do not expect some aural outbursts whatsoever, but prepare a warm (or better: icy) welcome to somewhat melancholic and introvert feelings translated the sonic way. Especially the second half, as from the semi-noisy intermezzo, does infect / affect undersigned’s brain, but that’s a compliment on top of my appreciation for this whole experience.

The EP comes in an eight-paged folded 3” edition (a deluxe version evidently) on canvas paper, and I do not think I need to say that (most of) the lay-out and photography were done by the guy himself, I guess… But beware: this material is strictly limited, so don’t come crying because I did warn you!