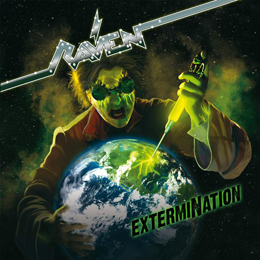 Raven were something of a cult band back in the eighties, and had some good songs, and although the manager of Megaforce Records Jon Zazula believed they had it in them to become a major label material (they signed their first record deal with Neat Records, the legendary low-budget metal label) and they eventually had a deal with Atlantic Records, the promises could never be fulfilled.

I guess there won’t be too many youngsters around who know this band, but they’ve been around since 1974.  Their music has heavily influenced speed/trash metal and of course also power metal.

I have to admit I didn’t even know they still existed, let alone that they still released new material, and that they still have the almost original line-up. Of course that isn’t that difficult, if you’re a three man band, with as staple two brothers. Compared to the material I know from Raven, which is eighties stuff, I find they have not drastically changed their style.  They still bring us mostly up-tempo power songs, but I find the raw edges they had back then, have been smoothed a bit.  And of course a better production has also helped the sound a great lot

Let’s say I was pleasantly surprised by this album.