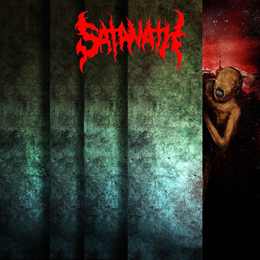 I know that the guy behind the sublime Satanath Records-label, Alexey Korolyov, is active in Abigorum, a solo-outfit from which I hope to hear more very soon. On August 20th 2014, for your information, we updated a review on his newest Abigorum-creation, called My Haemophilia, which undersigned could appreciate a lot. Apparently Alexey also acts (or acted?) under the moniker Satanath, and with this solo-project he released a split-cassette with Swedish artist Kai Grimmsberg (Drop Of Blood, 2012). The creations from that split-tape, by the way, appear on this album, which is a compilation of material Alexey wrote and recorded during early 2011 and late 2012.

What the Satanath-project stands for is quite remarkable / surprising / unexpected, for it has nothing to do with Black or Death Metal at all, cf. the Satanath-roster. Satanath are an electronic project, but at the other hand that is not completely unusual either. Many extreme bands have an electronic side-project (varying from softer Atmo-Ambient, over Dark Wave / Electro to Minimal Industrial Noise, and everything in between), and Satanath Records did release this kind of stuff before (think Necrosadik, Nebula VII, Disamoral, Ultimaratio, I Am Esper or Hulduefni).

So, what’s up with this stuff? Well, the compilation has a total running time of eighty (!) minutes. That’s pretty lengthy, but at the same time a nice gift for Alexey could have decided to release this stuff spread over two or three different separated discs; yet since he does not have the intention to get rich by this project, he compiled everything at once. Great attitude!

The Satanath-album opens with the intro Abigor Room, which is the shortest piece with its one minute of length. It is a very ominous, scarifying piece, which could have been part of an Italian Seventies Horror-movie. Then comes Lethal Execution, which shows another side of Alexey’s mind. This composition is an obscure Drone-thing, mixing elements from Dark Ambient and Martial Industrial, based on distorted and repetitive synth-lines and spooky drum programming. Despite being repetitive and minimal, there is quite some interesting variety, being underneath the grim surface. Next piece is Sacred Place Is Empty, a Noise-Industrial song. And this compilation continues that way, dwelling in suffocative and morbid spheres of Ambient, Noise and Industrial. And for each composition counts the fine equilibrium in between sober repetitiveness and bizarre creativity, turning several excerpts into (spi-) ritual and esoteric atmospheres, then again chaotic and post-apocalyptic ones. Stuff from Memento Mori (not the Death Metal label, evidently, yet the great sub-division of Dark Vinyl), Malignant Records and Cold Spring might be possible comparisons, yet from time to time I must also thing about the Ordo Catharsis Templi-series, the more minimal-nihilistic releases from Cyclic Law and (sadly defunct) Cold Meat Industry, or Dark Vinyl’s more electronized projects.