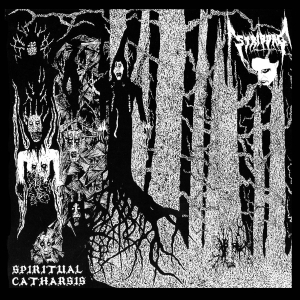 I can easily sum up tens of Black Metal bands and projects from Australia, but when talking about the Southern island Tasmania, there are only three names that immediately come to mind: Astral Winter and Atra Vetosus, both projects with Josh Young (Immortal Frost Productions) and Striborg. The latter is a very, very, extremely very much very productive outfit by one Sin Nanna (real name: Russell Menzies). This project was formed at the end of the first half of the Nineties under the moniker Kathaaria, and throughout just over two decades of existence, Kathaaria / Striborg did release tens of recordings (about thirty full lengths, several EPs, splits with e.g. Xasthur or Vardan, and diverse re-mastered re-issues and compilations). I do follow Striborg as from last century, and the best is yet to come: GrimmDistribution recently released a split with the magnificent project Abigorum, led by my dearest Obscure Music brother Aleksey from GrimmDistribution, Symbol Of Domination Productions or Satanath Records – and it is the latter, Satanath Records, that takes care of the re-release of Spiritual Catharsis too (what this review deals with). A review will follow, evidently!

Spiritual Catharsis was initially released in 2004 via Sin Nanna’s own label Finsternis Productions (back in activity, apparently), and re-issued for a first time in 2007 via Dutch Extreme Metal label Displeased Records (which re-released several older Striborg recordings, by the way). Now we have another re-issue, remastered in 2018 at Belarussian Digivision Records, available in a partnership of higher mentioned Satanath Records and Colorado-based Death Portal Studio. There are 500 copies in a jewel-case with a simple eight-page booklet. This one contains some of the lyrics in English or in the Russian (!) tongue, and with the same cover artwork as ‘back then’.

The album has a total running time of about seventy-three (!) minutes, and those trusted with at least some works of this artist / project, know what to expect. I can put it quite easily: this project’s material stands for simplistic yet highly atmospheric and ultimately grim (Underground) Black Metal with a couple of eerie ambient passages. This said…

Hey, of course that statement is somewhat narrow-minded, but actually it does represent the approach of Striborg’s aural art for sure. When it comes to the description ‘a couple of eerie ambient passages’, I am referring to the several different songs or intermezzos that are based on a chilly, gloomy synth melody, spooky and ominous. It’s not the so-called ‘Lovecraftian’ Dark Ambient stuff, yet rather a form of asphyxiating post-industrialism with a morbid minimalistic approach. But I assure you: this is at least as terrifying as any Lovecraftian Dark Ambient piece we’re trusted with lately. And what’s more, because of the minimal character, the discomfort is of the highest level. Abyssal horror it is!

The better part is based on a primal form of Black Metal, yet seen from quite a unique point of approach. There is a lot of variation in speed, with both doomy and blasting parts (and everything in between). As well, there is quite some variety when it comes to the structure of most compositions. The faster parts, for example, are fierce, energetic and violent, and at the same time quite darkening and overwhelming. In combination with the Arctic, sorry, Antarctic vocals, the result is simply freezing, besides breath-taking and frightening. The simplicity of the drum patterns – and hey, ‘simplicity’ is NOT a negative statement right here! – and the guitar sound à la early Burzum (don’t we love it all?), give the whole that ‘true’ attitude, adding melancholy and despair, oblivion and, also (!), hatred and disgust. Yet there is so much more. Excerpts of asphyxiation, integrity, depression, malignancy, it’s all part of the whole. Several tracks are injected with chapters based on (spooky / transcendental / mesmerizing) synth lines, ritual and occult passages, or even esoteric / ethereal tribalism. At the other hand, you have those moments of victorious battle-lust, winterly misanthropy and haunting oddness.

Hypnotic and buzz-sounding leads, reverbed rhythm string work, low-tuned bass lines, military drum patterns and tribal percussion, tortured noises, wretched voices, astral details (cf. a piece like Dicksonia Antartica, with these trembled voices), distorted sounds and so many other subtle, sometimes frenzy elements, all of them come with a lo-fi production that breathes purity, and that spits on ‘reaching a huge audience’. With Striborg, Sin Nanna does not follow trends, nor does he want to reach the status of a pop-idol. Yet a cult-status, to my opinion, he does deserve. And that under-produced sound is, in some way, both characteristic and totally fitting (even though some more detailed attention within the final mix would be fine, honestly). I like almost all of his works (except for the few ones I do not have in my possession), and Spiritual Catharsis represents the essence of Striborg, for it brings nothing but down-earthed, abyssal and basic Grim Sonic Majesty once more. After so many years, I do still appreciate this majestic piece of aural nebulae.

Recommended, even obliged, in case you do not have the original edition (or one of the former re-releases). Or in case you like everything in between, let’s say, Xasthur, Moloch, Vinterriket, Drowning The Light and the likes, and even Cryostasium, Sargeist or early Burzum!

FYI: besides a review on 2018’s split with Abigorum (as mentioned in the first paragraph), you can also expect one soon about Mysterious Semblance, the album that was originally released just a couple of minutes (okay, that might be an exaggeration, yet still) before Spiritual Catharsis. Pay attention, stay tuned!